The death and resurrection of IRGM - the "Jesus gene"

The world of genetics is filled with stories that are as gripping as the plot of any thriller. Take the IRGM gene - its saga, played out over millions of years, has all the makings of a classic drama. Act One: setting the scene. By duplicating and diverging, this gene thrived in the cells of most mammals as a trinity of related versions that played vital roles in the immune system.

Act Two: tragedy strikes. About 50 million years ago, in the ancestors of today's apes and monkeys, the entire IRGM cluster was practically deleted, leaving behind a sole survivor. Things took a turn for the worse - a parasitic chunk of DNA called Alu hopped into the middle of the remaining gene, rendering it useless. IRGM was, for all intents and purposes, dead and it remained that way for over 25 million years of evolution.

Act Three: the uplifting ending. The future looked bleak, but IRGM's fortunes were revived in the common ancestor of humans and great apes. Out of the blue, a virus inserted itself into this ancient genome in just the right place to resurrect the long-defunct gene. A fall from grace, a tragic demise and an last-minute resurrection - what more could you ask for from a story?

This twisting tale lies hidden in the genomes of the world's mammals and it was discovered and narrated by Cemalettin Bekpen from the University of Seattle. To reconstruct the evolutionary story of the IRGM gene, Bekpen searched for it in a variety of different species. 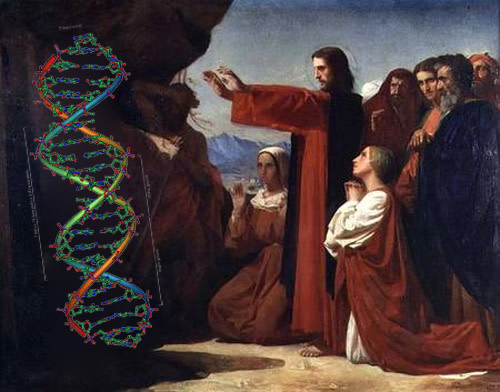 (Oh come on - you try to find an image to illustrate this story!)

Most mammals, such as the dog and the mouse, have three copies located one after the other. This trio of genes are "paralogs" - slightly different duplicates of a single ancestor. Two species of lemur - the ring-tailed and mouse lemurs - also share the same three genes, but all monkeys have just the one. This suggests that the IRGM cluster shrank from a trinity into a single gene in the last common ancestor of all apes and monkeys, which lived about 40 million years ago.

If that decline wasn't bad enough, Bekpen found that the remaining IRGM gene of monkeys is actually a dead remnant. It's much shorter than those of other mammals, and it has been so heavily abridged that it has lost the ability to encode a protein. In technical terms, it's a "pseudogene" and to paraphrase the Python boys, it's an ex-gene.

The villain that struck the killing blow to the IRGM family will be familiar to geneticists - it's a mobile piece of DNA called Alu. It could well be described as a genetic parasite, for it has the ability to cut itself out of its resident genome and insert itself into new locations. And it's a common feature of primate genomes - as much as 11% of our own DNA is made up of Alu sequences.

In the ancestor of monkeys and apes, an Alu sequence jumped into the middle of the last remaining IRGM, disrupting its sequence. Every three "letters" of a gene's sequence corresponds to one amino acid. To make a working protein, the gene needs to be "read" from the right position in order to manufacture the right chain of amino acids. With the insertion of Alu, that process starts from the wrong place leading to a wholly different chain of amino acids, and one that ends prematurely. It's called a "frameshift mutation" and it renders the gene useless.

Across 15 species of monkey from around the world, from marmosets to macaques to baboons, Bekpen found the same frameshift mutation. This means that Alu must have infiltrated the primate genome before the various monkeys diverged from one another, about 40 million years ago.

For 25 million years, the IRGM gene was effectively dead. But then, in the common ancestor of humans and the great apes, something unexpected happened. The gene somehow regained its ability to produce a protein, albeit a shortened one. The gene had been resurrected, and ironically enough, its saviour was another genetic hitchhiker that inserted itself in just the right place.

The new intruder was an "endogenous retrovirus" - a group of viruses that can integrate their DNA into the genomes of their hosts. The virus jumped into a position at the very start of the gene and its own sequence then drove how the gene was read and activated. Its presence negated the harmful effects of Alu, effectively getting rid of the frameshift mutation.

We humans have this resurrected IRGM gene, and Bekpen found that it's active in a variety of different tissues including the heart, brain, kidneys and particularly the testicles. The results don't provide direct evidence that the gene actually produces a working protein, but there's good reason to believe that it does.

Mutations in the IRGM gene are associated with Crohn's disease - an inherited disease, where the immune system attacks the digestive tract, leading to chronic inflammation. That strongly suggests that the IRGM gene has regained some sort of role in the immune system, and it was one of the reasons why Bekpen started investigating the gene in the first place.

But as he says on his homepage, "Who cares about Crohn's disease? We just discovered the Jesus gene!"