In the Ivory Coast, a small stream called Audrenisrou winds its way through the lowland rainforest of the Tai National Park. On the floodplain of this stream, at a site called Nuolo, lie several stones that seem unassuming at first glance. But to the trained eye, they are a window to the past. 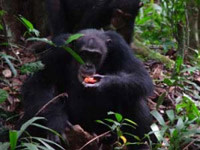 Their shape is different to other stones that have been worn away by natural erosion. They have been flaked in systematic ways and many are flattened and sharp. Clearly, they were shaped by hand for a purpose - they are tools. Their creators were not humans, but close relatives who lived in these rainforests thousands of years ago - the ancestors of modern chimpanzees.

The Nuolo stones were uncovered by Julio Mercader form the University of Calgary, Christophe Boesch from the Max Planck Institute of Evolutionary Anthropology, and their colleagues. They are a magnificent archaeological find - the first ever evidence of prehistoric ape behaviour anywhere in the world. Humans have a rich prehistoric past, informed by similar finds like the Olduwan sites. These unearthed treasures shows us how our ancestors developed the tools that continue to serve us well today. For chimps, this is the first time that such sites have been found.

The evidence that the Nuolo specimens were created by chimps is compelling. The density of stone pieces in the site, the preferred types of rocks, the length of the stone flakes and the patterns of wear closely mirror those of modern chimp tools. They also carry the evidence of their past uses, as hammers and anvils for cracking nuts; their crevices contain granules of starch that clearly came from nuts. Mercador and Boesch even managed to narrow the granules' origins down to three possible species, all of which are currently cracked and eaten by today's chimps. 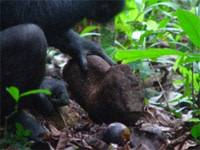 In contrast, the team found scant remains of tubers and legumes, the main food source of forest-dwelling humans. This suggests that prehistoric humans who also, over time, visited the river-side site were not the creators of the Nuolo tools. But Mercador and Boesch found even stronger evidence.

Human hammers usually weigh less than 400g, and even our ancestors' anvils weighed no more than a kilogram. The far more powerful chimp with its larger hand can wield a tool many times heavier, anywhere from one to nine kilograms in weight. Mercador and Boesch found that the stone tools at Nuolo most likely weighed about 2 kilograms, far too heavy for a human but well within the limits of even a weak chimpanzee.

Together, this evidence paints a remarkable picture of a chimpanzee Stone Age, when ancient chimps were clearly cracking nuts in the same way they do now, over four millennia ago. Chimpanzees are highly advanced tool users. But some critics have sold short their abilities, claiming that they learned the use of tools by, for lack of a better word, apeing nearby humans.

The Nuolo finds puts paid to that suggestion. The tools predated the advent of farming in the rainforest by some time. Nuolo also lacks evidence of any of the other tools used by humans to grind and pound starchy tubers. Among chimpanzees, nut-cracking is clearly a cultural tradition, passed down over time through over 200 generations of chimps. Humans and chimps either developed this technology independently, or they inherited it from a common ancestor who had already begun to use tools.

Not so unique after all

With studies like this, the list of attributes that are unique to humans seems to be getting smaller all the time. Scientists have found that chimpanzees hunt with spears, jays can plan for the future, and even the long-dead dinosaur Bambiraptor, gripped prey with opposable fingers.

But as we start to come down from our pedestal, we should not mourn the loss of our position, but rejoice in our connectedness with the rest of the living world. These discoveries emphasise our position at the end of a continuous evolutionary spectrum, rather than atop a looming precipice. The outdated view that we have been awarded special dominion over other life should be replaced by a humbler view, where our position of biological authority is tempered with respect.

Why has it taken so long for such findings to come to light? Centuries ago, anthropomorphism was commonplace and these experiments would have seemed like pointing out the obvious. But of late, biology has taken a more reductionist turn and signs of potential animal behaviour are scrutinised under the harshest and most sceptical light. In many cases, this quite rightly avoids the false conclusions based on flimsy and anecdotal evidence. But while scientists have taken great care to ensure that their interpretations are not biased towards human perspectives, the same cannot always be said the design of the experiments themselves.

One of the most significant problems with studying animal intelligence is that many species experience and react to the world in completely different ways to us. For example, to pass the classic test for self-awareness, an animal must show that it recognises itself in a mirror, by examining a mark previously made on its face (see right). Gorillas and dogs tend to fail the mirror test, but not because they are mentally less advanced than successful examinees like elephants or chimps. Gorillas view direct eye contact is a sign of aggression and tend to avoid it, while dogs rely on smell as their primary sense, rather than sight.

Simply put, can we truly claim to understand the limits of another animal's intelligence when we know so comparatively little about their behaviour or perceptions? Cleverly designed experiments may bring us closer to an answer, but sadly, we may never get the opportunity to conduct them. Save ourselves, the most intelligent animals on the planet - the great apes, elephants, dolphins and whales - are mostly endangered, with many species facing a very real threat of extinction. Chimpanzees, like those in the Tai National Park are under threat from the loss of their habitat, and the illegal bushmeat trade.

A massive amount of evidence now paints these, our closest cousins, as sophisticated animals with their own culture. Imagine how tragic it would be if they died out for good, leaving only a set of shaped stones as the only lasting signs of their intelligence.