The Bushmen are not primitive! (not necessarily) 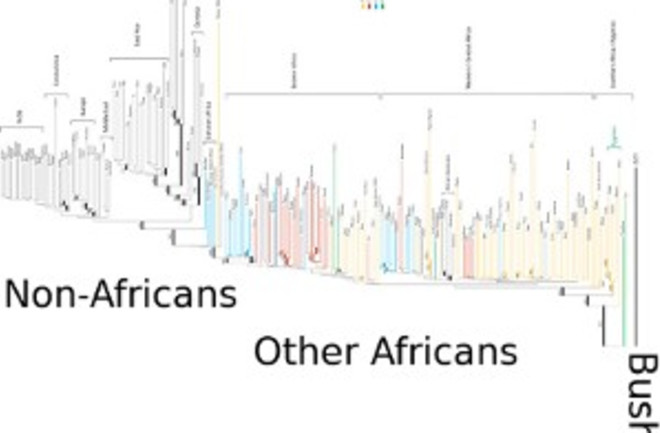 To the left is a figure from the 2009 paper The Genetic Structure and History of Africans and African Americans. This paper happens to have excellent coverage of African populations, and the figure is a phylogenetic tree generated from distances between those populations, as well as some non-African ones. I've labelled the broad clusters. The Bushmen* branch off first, along with the Pygmies. The other clade represents all other humans, African and non-African. Following the non-Bushmen/Pygmy clade down its branching pattern all non-Africans eventually go their own way, and differentiate into their various groups. South Asians form a clade with Europeans and Middle Easterners. East Asians, Native Americans, and more broadly Oceanians, form their own clade. Outside of Africa you basically have a west vs. east & further east division. These trees are essential in helping us visualize genetic relationships. Tables of pairwise distances are simply not as informative as representations of the data for the human mind. More colloquially, they blow. Trees and two-dimensional plots are much better representations of the data which we can digest in a more gestalt fashion. We see, therefore we know. Ah, but even the innocent tree can lead a mind astray. Or at least this particular tree. So let's try something different.

Here's a figure from Whole-Genome Genetic Diversity in a Sample of Australians with Deep Aboriginal Ancestry. This tree has a smaller number of populations, but the broad geographical relationships are the same. West Eurasians are one cluster, while East Eurasians, Native Americans and Oceanians are their own super-cluster which divides further. Among the Africans you see that the Bushmen and the Mbuti again exhibit more distance from the other groups. But the biggest difference is that the tree is unrooted, so you don't immediately orient yourself from outgroup to ingroup in a serial manner. Now let's look at a headline inspired by one of the papers: African San people - the world's most ancient race. Going by the figures which paper do you think it was? It was the first paper of course. There's a huge problem when these phylogenetic trees are generated that human outgroups, or basal clades, are defined as 'ancient,' the 'oldest,' or the most 'antique.' This is just confusing. Not only that, as a person deeply committed to the dignity of the indigenous peoples I am offended! I generally get irritated or blow a gasket when people make that confusion in the comments, because I think it leads to lazy inferences. One of my main quibbles with The Faith Instinct is that Nicholas Wade used the Bushmen as proxies for ur-humans to reconstruct prehistoric religious practice, implicitly relying on the fact that they're the basal lineage in most genetic studies as if they're a fossil which we can use to paint the past.

In any case, I was going to recommend to readers that they just refer to 'basal clades.' Well, I'm not a taxonomist obviously so I decided to look in the literature, and I found this paper, Which side of the tree is more basal? The tree they use to illustrate the lack of utility of terms like 'basal clade' is to the left. Let me quote them:

...Both branches originating from a node (i.e. the two sister groups) are of equal age and have undergone equivalent evolutionary change. Whether a group has branched off early (basal) or later in the phylogeny contains no information about this particular group, but information about both this group and its sister group, because both branched off at the same time. By notation we tend to portray one branch (the species/taxa-poor one) as being on the left, and the other (species/taxa-rich) as right – but this infers nothing about their evolutionary development, only about their taxon richness (speciation less extinction) at a given geological period (mostly the present), or, even worse, about the taxon sampling pattern in the particular study. Different taxon sampling leads to different interpretation about ‘the most basal clade’.... ... Considering clades or taxa as ‘basal’ is not only sloppy wording, but shows misunderstanding of the tree and may have severe semantic and argumentative implications. Declaring one sister group to be basal gives the other sister group a higher or at least a different value (‘the basal clade’ vs. ‘the derived clade(s)’). If the Polyneoptera is the most basal clade of the Neoptera, then the rest of the Neoptera (the Eumetabola) is given a higher value (as the ‘main’ body of the group). Admittedly, it contains more species, but this is not a quality necessarily granting it higher value..... If the phylogenetic tree in Fig. 1 is correct, Polyneoptera and Eumetabola are sister groups. There is no necessity to term either as ‘basal’. Even if one wants to avoid the little-used name Eumetabola, it is easy to describe the Polyneoptera as the sister group of the remaining Neoptera. Argumentation with sister-group relationships is easy and shows relationships much more clearly than declaring one sister group to be basal. The ‘basal position’ within an ingroup always means ‘sister to the remaining taxa’, so say so!

The argument here is obviously embedded in the milieu of systematics and their particular concerns. But their objection to the term 'basal clade' is actually pretty much my main qualm which using terms like 'ancient.' I don't think using 'sister to the remaining taxa' is going to be informative to most people, so at this point I don't know what I'll use for short hand. Outgroup seems viable. I don't really think about systematics in a deep philosophical sense. But the problem of terminology here, and the evolutionary implications therein, have brought home to me utility of a precise and accurate systematic framework in biology. * The term "San" is like the term "Lapp" or "Welsh," what others call them, so I'll use Bushmen.