The Bird That Dare Not Speak Its Name 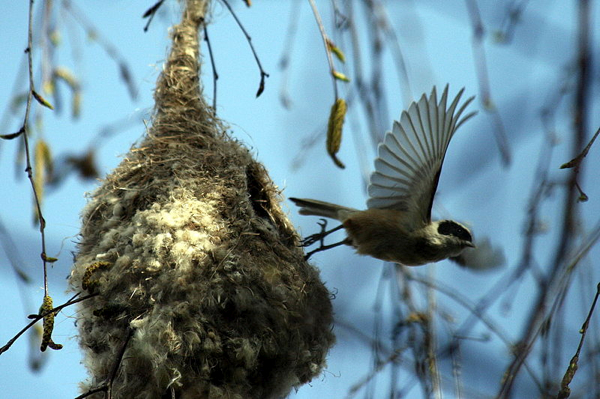 Get your sniggering over now. I am going to blog about the Penduline Tit. This post is actually safe for work. The Penduline Tit is not a body part but an ordinary-looking bird. Penduline refers to the pendulous nest that the birds build for their eggs. What makes the bird interesting to me is not its Beavis-and-Butthead caliber name, but how it raises its young. If you think that nature is never destructive, or that natural selection automatically finds beautiful solutions to life's problems, this bird has a lesson for you. The Penduline Tit--do you mind if I just call it Remiz pendulinus?--is a common sight in Europe and parts of Asia. If these birds build nests in your backyard, you may get the impression that they're the very picture of parental harmony. After a male attracts a female (in part thanks to a handsome black eye-mask), they mate. He then gets to work building a large nest hanging from a bough, with a narrow-mouthed opening in which the mother can hop in order to lay the eggs. Either the mother or the father will take on the job of incubating the eggs and then feeding the chicks once they hatch. Sounds lovely, right? But there's one disturbing little fact to consider: a third of the egg clutches laid by Penduline Tits are abandoned by both parents. The chicks are perfectly healthy, but they're left to die. As natural selection makes different genes more common in a species, some of those genes can come into direct conflict. Genes for male and female behaviors are particularly prone to clash, because a strategy that works best for genes in fathers may not be so good for the mothers, and vice versa. These clashing interests create what evolutionary biologists call sexual conflict. To understand the source of the conflict in these birds, you have to bear in mind that natural selection favors genes that boost the reproductive success of individual animals--but that success has to be measured over an entire lifetime, not just a single clutch of eggs. If a female stays behind to take care of her clutch of eggs, those chicks will typically grow up and carry on her genes. But if she can desert the nest, leaving the father behind to take care of the chicks, she can find another male bird to mate with and have two clutches in a seson rather than just one. Researchers have found that females that have two clutches in a season end up with about one extra chick for the season compared to a female that stays in her original nest. This strategy backfires if the father abandons the nest first. Natural selection apparently favors fathers that bolt, because they can find another female to mate with, too. But the female has an advantage over the male: she controls the information about the eggs. A father must time his desertion carefully if he will produce the most chicks. If a male abandons a female before she lays her eggs, she may not be able to successfully do so. Leaving early also creates the danger that another male will mate with the female and fertilize the last eggs in the clutch. If a male deserts too late, however, the breeding season may be so far gone that he loses the opportunity to mate with other females, since they’re already paired with other males. It’s crucial for the males to track the egg-laying process. Females have evolved to make it hard for males to figure out what’s going on. As they prepare to lay eggs in the nest, they become very aggressive with their mate. In some cases they'll even kill him as they keep him from seeing how far things have progressed. And once mothers have laid their eggs, they hide some of them at the bottom of the nest. Even if the male should manage to get in, he will be deceived. Experiments confirm that females hide their eggs as part of the sexual conflict over the chicks. If scientists uncover the eggs, for example, a female become far more aggressive in keeping the male away; nevertheless, the male usually deserts her that very day. It's very tempting to see human virtues in animals--imagining, say, that penguins love traditional (American) norms. I wouldn't suggest look to the Penduline Tit for a role model for being a good parent. But that's not because the birds play too many video games or are otherwise degenerate. They are simply stuck in the box sexual conflict put them in.