The Biggest Dinosaurs Started Small but in Shape 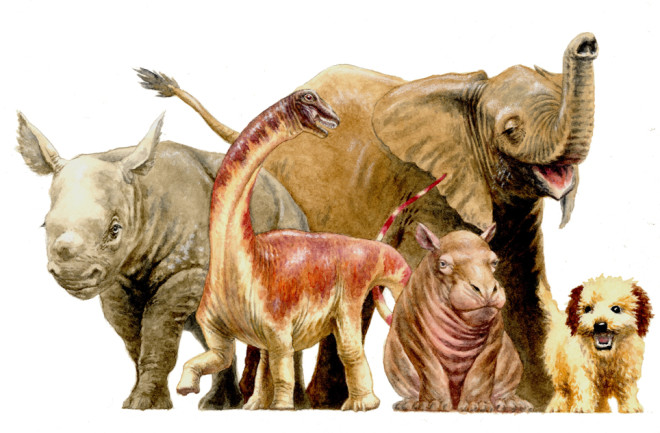 Only one of these animals makes an appropriate household pet. But all of them show proportions typical of newborns and juveniles, including larger heads and shorter limbs than adults of the same species. All of them, that is, except for the young Rapetosaurus: Hatched essentially looking like a mini-adult, it’s likely the dinosaur was more independent from birth and received less parental care. (Credit: D. Vital) What does a Greek goddess have in common with a titanosaur, the largest land animal ever known? Apparently, they both hit the ground running. Athena (the goddess of justice, not the dreadful song by The Who) sprang from the head of her dad Zeus as an adult, wearing armor and ready for action, according to Greek mythology. And today in Science, researchers described a baby Rapetosauus krausei that essentially hatched as a mini-adult — emphasis on “mini.” R. krausei is a species of titanosaur that grew to about 50 feet long, but this little fella was barely 14 inches at the hip when it died at just a couple months of age. Why is being born with adult proportions a big deal? It’s unusual, for starters. Newborns and juveniles of many species across the animal kingdom — including other dinosaurs — have proportions different than adults, such as shorter limbs or larger heads. The precocious pint-sized R. krausei informs our understanding not only of the titanosaurs’ lifecycle and physiology, but also, quite possibly, their behavior.

The roughly 70 million-year-old R. krausei whippersnapper named in Science as UA9998 was found in Madagascar’s Maevarano Formation. Researchers believe it died of starvation during a drought. Bummer for UA9998, yes, but a gift to science: analysis of the partial skeleton revealed the bones were nearly identical in shape to that of adult R. krausei specimens and were growing at a rapid but even rate, preserving the proportions, a process known as isometric scaling. And I’m not kidding about rapid. Little UA9998 went from a birth weight of about 7.5 pounds (3.4 kg) to nearly 90 pounds (40 kg) in the estimated 39-77 days it was alive. Titanosaurs, the super heavyweights of the long-necked, whip-tailed sauropod dinosaur clan, could weigh upwards of 70 tons in adulthood, and paleontologists have long sought to understand how they managed to haul all that weight around. UA9998’s dog-sized skeleton will help researchers model titanosaur growth and locomotion, but it also provides a key piece of evidence about likely parental investment. Big-eyed, big-headed, short-limbed juvenile animals are less mobile and tend be more dependent on their parents: feed me, warm me, protect me from that bitey thing sniffing around the den, and so forth. Thanks to UA9998’s preserved mini-me proportions, however, researchers feel confident that R. krausei — and likely all titanosaurs — was more independent from birth, requiring (and receiving) less parental care.

While we’re on the subject of hatchlings, welcome to Dead Things. It’s a blog borne of my interests in fossils, archaeology and the story of all that has gone before us. But most of all, it’s a place where I hope you’ll join me in enjoying science. Yes, science is serious, but sometimes the sheer pleasure of learning gets lost in the data-crunching and deep dives into detail. I’ll be sharing things I find intriguing or fun (sometimes both) and providing links for you to read more if you like. My inspiration is the awe and excitement I felt as a child when visiting the American Museum of Natural History in New York, looking up (and up) at the dinosaurs filling cavernous exhibit halls (and that insane Irish elk…does anyone else think its antlers look like frayed dragon wings?). Although this blog is all about dead things, I hope it enlivens your sense of wonder and delight.