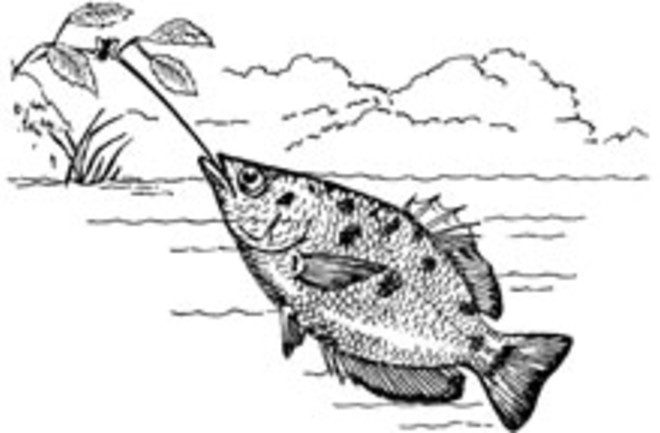 When an archer fish gets peckish and goes hunting for a juicy insect meal, it cruises toward the water's surface with its ammunition packed in its mouth: As soon as it spots an insect above the surface, it fires out a jet of spit. This remarkable marksman has been known to bring down insects hanging from tree limbs as high as 3 feet above the water's surface. And according to a study just published in the Proceedings of the National Academy of Sciences, it uses a visual processing technique that was previously thought to exist only in mammals. The study found that fish pay attention to something called orientation saliency, which means that fish can more easily spot an object that is oriented differently from its background. The researchers first trained some archer fish to spit at the image of an insect projected on a LCD screen above their tanks, then presented images of objects that were either aligned with or perpendicular to a patterned background. They found that the fish spit far more accurately at objects that were not lined up with the background. (See video of a spitting fish in the lab below.)

"The fact that both humans and fish, which are very distant in terms of evolution, process orientation in similar ways [suggests] that orientation is a critical aspect of visual information," [said] Ohad Ben-Shahar, a computer scientist at Ben Gurion University of the Negev in Israel and lead author of the study. [The Scientist]

Now that researchers have determined that an archer fish can perceive different orientations, the question is how its brain is processing the information. Ben-Shahar says the neural pathways at work are still unknown:

"In mammals the saliency of orientation is associated with [specialized neurons] that we know to exist in the visual cortex," he said. If fish, who don't have a visual cortex, can exhibit the same behavior, then researchers need to reestablish their understanding of how these processes work. [The Scientist]

Related Content: 80beats: A Dead Flying Fish in a Wind Tunnel Is Still an Excellent Glider

80beats: Acidic Oceans May Cause Clownfish to Swim Straight to Their Doom

Discoblog: This Fish Has Seen the Enemy, and It Is Him

Discoblog: Fish Fall Victim to “Pollution Goggles” When It Comes to Mating