The remarkable 2018 eruption at Kīlauea disgorged over a cubic kilometer of lava and collapsed the volcano's summit. 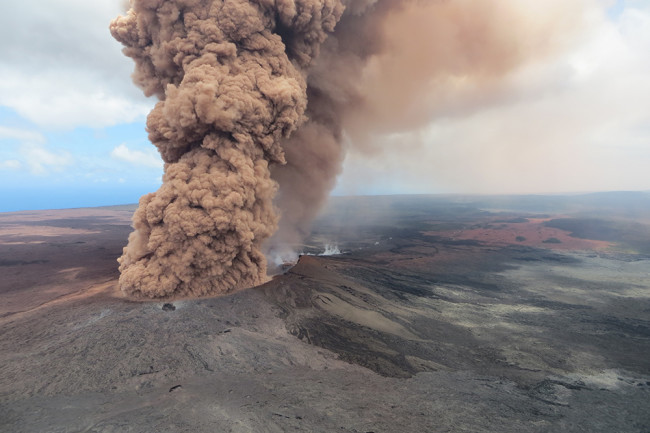 Few recent eruptions have captured the public imagination like the 2018 events at Hawaii's Kīlauea. An ongoing eruption from May to August inundated the lower slopes of the volcano, covering multiple towns with a cubic kilometer of basalt lava. It even ended up filling an entire bay, making it the island's newest peninsula.

At the same time, the summit of Kīlauea collapsed into itself, creating a new caldera almost 1,600 feet (500 meters) deep in just three months. We have rarely, if ever, been able to closing monitor this dramatic collapse of a volcano. Now, three new papers published in Science find that it might not take much of an eruption to cause it to happen.

The summit of Kīlauea showing the effects of the 2018 caldera collapse. The shot on the left is prior to the eruption, the shot on the right is late July 2018. (Credit: USGS/HVO)

Calderas are round-ish depressions on volcanoes formed by the collapse of the land surface. In some cases, they are caused by the rapid eruption of ash and debris in an explosive eruption. We see the evidence of this at places like Crater Lake in Oregon, Okmok in Alaska and Yellowstone in Wyoming.

However, it doesn't take an explosive eruption to form these potentially massive pits. Volcanoes like Kīlauea, Fernandina in the Galapagos and Piton de la Fournaise on Reunion Island all have massive calderas spanning miles across. These were formed during eruptions that weren't dominated by explosive eruptions but rather vast lava flows that emanated from somewhere on the volcano. Sure, there might have been some explosions as we saw last summer at Kīlauea, but what you really need is lots of lava.

The summit of these volcanoes are being supported to some degree by magma. Inflate a ballon and bury it in wet sand. Then carefully deflate the balloon and the sand above it collapses into the space where the balloon was. This is roughly analogous to what happens during a caldera-forming eruption.

Thanks to all the geophysical research done at Kīlauea, we know a lot about the magmatic system under the summit of the shield volcano. Scientists believe that a reservoir of magma sits a mile or so under the summit. The magma under the volcano helps hold the summit up, even when it might be an "open" reservoir. Kīlauea's former lava lake was a sign that the reservoir was full of magma and that some of it was exposed at the surface.

Geoscientists at the USGS Hawaiian Volcano Observatory think that the summit reservoir held somewhere in the vicinity of 0.6-1.7 cubic miles (2.5-7.2 cubic kilometers) of magma at the start of the 2018 eruption. By the end of the eruption in August 2018, about 0.2 cubic miles (1 cubic kilometer) of new lava had erupted at the far end of the East Rift. So, the shallow reservoir didn't fully empty ... not even close.

So, why did Kīlauea's summit collapse? The ideas presented by the researchers in Science suggest that the event didn't require the reservoir to empty as much as we thought previously. Instead of getting anywhere close to empty, the collapse began when ~3.5 percent of that reservoir had emptied and when all was said and done, only between 11 percent and 33 percent was gone. Still, the summit caldera was ~0.20 cubic miles ... so roughly equivalent to the volume that erupted.

The collapse didn't happen overnight, either. Instead it was a series of events that followed a cyclic pattern. Another Science study showed that dozens of collapses at the summit happened over multiple months. With each collapse, the lower East Rift zone 25 miles (40 kilometers) away pulsed with increased lava, showing that there was likely a direct connection between the summit's collapse and the magma stored there as well. 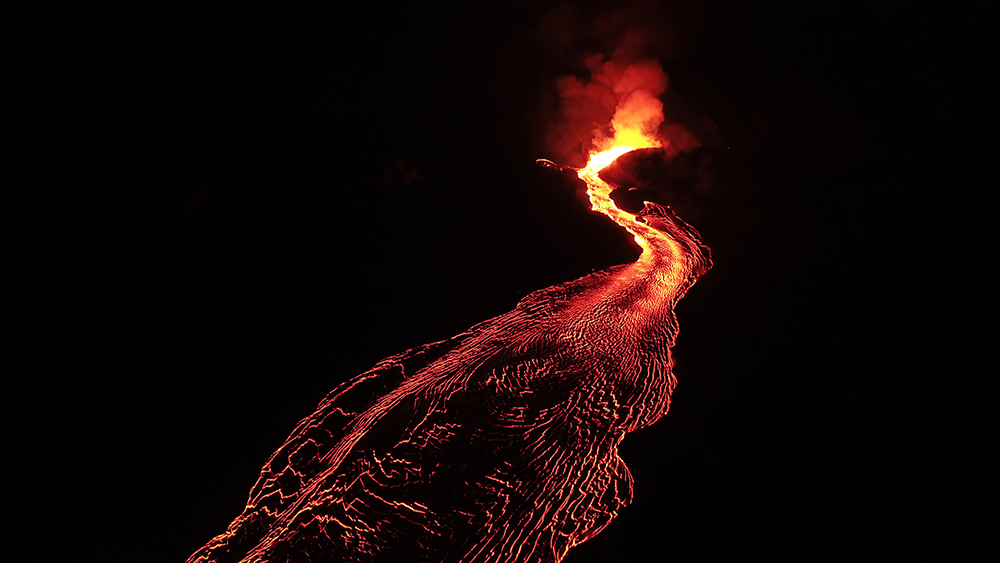 Even the composition of the lava that erupted in the lower East Rift zone changed over the course of the eruption. In the final of the trio of new studies, Cheryl Gansecki from the University of Hawaii at Hilo and others detail how the first stuff to erupt was material that likely had been stored in the long East Rift zone for some time. It contained much more evidence of crystallization -- minerals forming as magma cools -- so that the first lavas were higher in silica, lower in magnesium and cooler. As the eruption progressed, the magma erupting became lower in silica, higher in magnesium and hotter (in general), supporting the idea that new magma was pouring into the system from the mantle over the course of the summer.

Why would this be? Imagine the East Rift zone like a bottle of ketchup from the fridge. Sometimes when you get it out, you have to squeeze out the old, dried ketchup to get to the fresh stuff. The equivalent may have happened at Kīlauea during the eruption as magma forced its way down the East Rift zone, pushing the older, more crystallized stuff out of the way.

Ultimately, Kīlauea is not the volcano it was prior to May 2018. Not only have eruptions that had continued for over 35 year on the volcano ceased, but the summit now has a new caldera nested inside the older, larger Kīlauea caldera. A new lake has formed at the summit, this time filled with water rather than lava. The volcano currently sits at Green Alert status, the lowest a volcano that is being monitored by the USGS can be. In fact, Kīlauea's larger neighbor, Mauna Loa, is at a higher alert status (Yellow) because of small signs of unrest there (it last erupted in 1984).

What is most fascinating to volcanologists is just how closely we got to watch a massive volcano like Kīlauea fall in on itself during this lower East Rift zone eruption. The fact that it took less than 1/3 of the total magma volume in the summit reservoir to hasten the caldera collapse means we might need to rethink the potential for eruptions after such events. No longer can we safely assume that the magma reservoir at such volcanoes is tapped out after a collapse. That might be one of the most important legacies of the 2018 eruptions at Kīlauea.