This year's crop of new species landed in the spotlight ready to rumble. 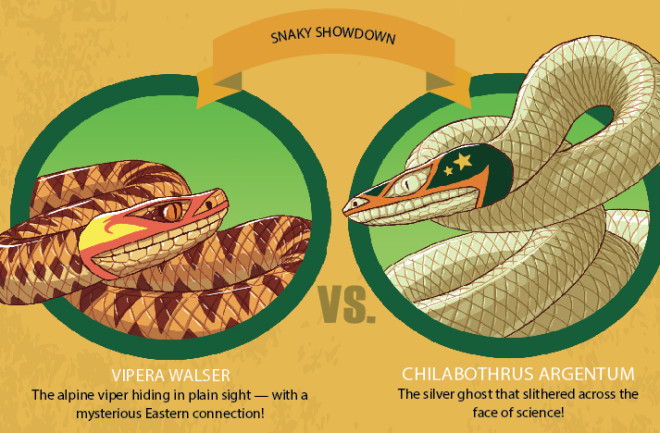 First described in July in the journal PLOS One, these ants were named after two of the dragons in writer George R.R. Martin’s fantasy series, which inspired HBO’s popular series Game of Thrones. Both species are found on the eastern side of New Guinea; researchers studying ants on the island wanted to understand the purpose of the elaborate spiny protrusions on the backs of a class of ants known as workers. Using X-ray microtomography, the team found muscle fibers within the spines, suggesting that, although the protrusions are believed to be defensive, they may also provide support for the ants’ particularly large heads and help them to carry heavier objects.

On Manus Island, separated from New Guinea by about 100 miles of ocean, researchers found one of the largest rats known from the Melanesian archipelago, a particularly rich region for rat diversity, according to the April study in the Journal of Mammalogy. That single living individual, as well as skeletal remains, indicate Rattus detentus has a heavy build and shorter tail than many other members of the genus. It weighs in at nearly a pound — that might not sound like much, but it’s bigger than most members of Rattus norvegicus, the species most likely to sniff around your garbage or hang out at the nearest subway station. The Manus Island rat’s scientific name is a reference to detention centers on the island for asylum seekers hoping to reach Australia.

A revision of how American tarantula species are classified, published in February in ZooKeys, identified more than a dozen new species, including this brawny arachnid. A. johnnycashi hails from the western foothills of the Sierra Nevada and is distinguished from closely related species by the black color of adult males, the reason it was named after Cash, the Man in Black.

The Colombian tarantula, first described in ZooKeys in June, has a unique weapon. When threatened, the spider defends itself by shooting a ball of stinging hairs from its abdomen. The barblike hairs may pack enough punch to kill small mammals. This defense, along with unusually shaped genitalia, placed the spider in its very own genus.

First described in 1876 as Polypedates jerdonii, the frog then disappeared and was presumed extinct. Thanks to a recent survey and study of frogs in northeastern India, published in January in PLOS One, the frog was found alive and well, living in tree holes as high as 18 feet above the forest floor. DNA analysis allowed more precise classification, placing it in a new genus.

Sphenopus exilis, the lone wolf of the sea:

Zoantharians, a type of sea anemone, are known for living in colonies and harboring single-celled zooxanthellae in symbiotic relationships. But S. exilis, discovered off the coast of a southern Japanese island and described in ZooKeys in July, is one of only four solitary-living zoantharians. Just how rare is it to find a lone new Sphenopus? Well, the last one before S. exilis was found in 1888.

Two valleys in the Italian Alps are home to a snake unlike any other in the region — even though it looks a lot like its neighbors. V. walser is genetically distinct from other western European vipers, and instead appears most closely related to snakes found only in the Caucasus Mountains, more than a thousand miles to the east. Researchers published the discovery of the remarkable “relict” species in June in the Journal of Zoological Systematics and Evolutionary Research.

Highly endangered and found only on one small island bank in the Bahamas, this West Indian boa is a striking silver color. Researchers believe it’s been about 2.7 million or so years since it diverged from its neighbors genetically. Describing the snake in Breviora in May, the team documented six individuals — including one discovered crawling across a researcher’s face as he slept on the beach.

Researchers reported in Nature Microbiology in February that they were able to sequence four new genomes of archaea, single-celled organisms that are notoriously difficult to study because they live in extreme environments. Named for the Greek god of the underworld, these archaea typically dwell miles underground without oxygen or light. They may get their energy by metabolizing carbon monoxide using an unusual process, according to the researchers.

This flower-fiend reared its ugly head to science in July in PhytoKeys and, once seen, can’t be forgotten. Native to Colombia, the orchid has distinctive clawed petals and a gynostemium, or reproductive structure, that bears uncanny resemblance to a purple flame-haired demon.