The 2009 John Wesley Powell Memorial Lecture: "What Is Life?" 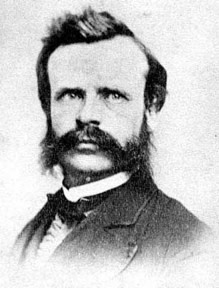 I'm honored to report that I've been asked to deliver this year's John Wesley Powell Memorial Lecture. Here is a description of the lecture series from its organizers, the Southwestern and Rocky Mountain Division of the American Association for the Advancement of Science:

The John Wesley Powell Memorial Lectures were inaugurated in 1929 in honor of the distinguished geologist and leader of the first expedition down the Colorado River through the Grand Canyon. Each year since then, with the exception of the years during WWII when the Division did not hold meetings, SWARM has invited a distinguished scholar to deliver a lecture at the Annual Meeting on a subject of his or her choosing. An attempt has always been made to select speakers who represent as wide a diversity of scientific endeavor as possible. Some of the previous Powell lecturers have included Oliver Sacks (2000), Holmes Rolston III (1998), Carl Sagan (1992), Lawrence Slobodkin (1987), Paul S. Martin (1978), Eugene Odum (1968), A.H. Compton (1939), Otto Struve (1934) and Aldo Leopold (1933).

The title of my lecture will be, "What Is Life? An Ancient Question Meets Twenty-First Century Science." I'll be delivering my lecture on the evening of March 29, during AAAS-SWARM's annual meeting. It will take place at the Allen Chapman Activity Center at the University of Tulsa in Tulsa, Oklahoma. The talk is open to the public. More details can be found here. I'm looking forward to visiting Oklahoma for the first time, and I hope readers in and around Tulsa will be able to join me. [Image: Grand Canyon National Park]