The odor of fresh-turned dirt can be intoxicating. "Everyone who digs in a garden can recognize the smell; it has almost a psychological effect on you," says Keith Chater, a microbial geneticist at the John Innes Center in Norwich, England. Previous researchers identified the source of the smell as an organic chemical called geosmin. Chater and his colleagues have now traced the origin of this compound to a single gene, Sco6073, in the common bacterium Streptomyces coelicolor (below). Chater says the turned-dirt odor may help S. coelicolor survive in arid regions. According to folklore, camels and other creatures are attracted to the smell of geosmin, which may tell them where to find water. The animals might then unwittingly spread the bacterium from one oasis to the next. Chater has discovered how to disable the dirt-smell gene, which sometimes proves a nuisance. When pharmaceutical companies produce Streptomyces in large batches to make drugs, the compound can produce quite a stink. "Our technology makes it possible for companies to eliminate the smell," Chater says. 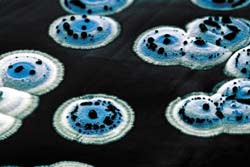