Thanks to one gene, this fly needs a cactus to escape Neverland 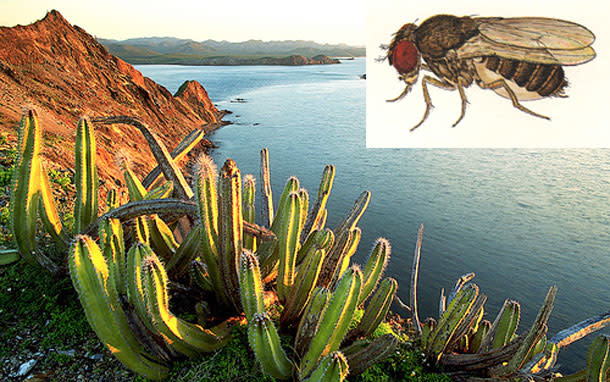 In North America’s Sonoran desert, there’s a fly that depends on a cactus. Thanks to a handful of changes in a gene called Neverland, Drosophila pachea can no longer make chemicals that it needs to grow and reproduce. These genetic changes represent the evolution of subservience – they inextricably bound the fly to the senita cactus, the only species with the substances the fly needs. The Neverland gene makes a protein of the same name, which converts cholesterol into 7-dehydrocholesterol. This chemical reaction is the first of many that leads to ecdysone – a hormone that all insects need to transform from a larva into an adult. Most species make their own ecdysone but D.pachea is ill-equipped. Because of its Neverland mutations, the manufacturing process fails at the very first step. Without intervention, the fly would be permanently stuck in larval mode. Hence the name, Neverland—fly genes are named after what happens to the insect when the gene is broken. Fortunately, in the wild, D.pachea can compensate for its genetic problem by feeding on the senita cactus. The cactus produces lathosterol—a chemical related to cholesterol. D.pachea’s version of Neverland can still process this substitute, and uses it to kickstart the production of ecdysone. The senita is the only plant in the Sonoran desert that makes lathosterol, the only one that lets the fly bypass the deficiency that would keep it forever young. It has become the fly’s dealer, pushing out chemicals that it cannot live without, and all because of changes to a single fly gene. The intimate relationship was discovered back in 1965, but Michael Lang form the Université Paris Diderot has only just discovered the genetics behind it. He showed that D.pachea’s version of Neverland has gone through dramatic changes that aren’t found in its three closest relatives. In particular, it has accrued changes in parts of the gene that are exactlythe same in other insects, and even back-boned animals like us – regions that are undoubtedly important for building a working Neverland protein. Lang also found that D.pachea’s Neverland protein differs from its ancestral form by 19 amino acids. By adding some of these mutations, one by one, into the working protein of a different fly (and reverting D.pachea’s version into its old guise) Lang found that two to four of them are enough to abolish Neverland’s activity to process cholesterol. Together, this handful of mutations transformed D.pachea from an independent insect to one whose survival is utterly tied to the senita cactus. Lang thinks that D.pachea’s slide into cactus-dependency began when it evolved resistance to the senita’s toxic chemicals. Other flies did not, and suddenly, D.pachea had access to an exclusive food source. It also had access to lots of lathosterol, and with this alternative chemical around, it no longer needed the ability to convert cholesterol. Mutations that eliminated this ability did the fly no harm, and they soon spread through the population – some of them even gave D.pachea a slight edge when it came to processing lathosterol. These same mutations tied D.pachea to the cactus, turning an exploiter into an exploitee. There are many examples of specialist species that depend on another for its survival. The koala eats only eucalyptus. Many plants are pollinated by just one species of bird or butterfly. These tight associations can evolve gradually, but D.pachea’s story tells us that they can be sealed in fewer steps than we think. Reference: Lang, Murat, Clark, Gouppil, Blais, Matzkin, Guittard, Yoshiyama-Yanagawa, Kataoka, Niwa, Lafont, Dauphin-Villemant & Orgogozo. 2012. Mutations in the neverland Gene Turned Drosophila pachea into an Obligate Specialist Species. Science http://dx.doi.org/10.1126/science.1224829Images: Cactus by Pictrues; fly from STUDIES IN THE GENETICS OF DROSOPHILA III. THE DROSOPHILIDAE OF THE SOUTHWEST J. T. Patterson