Tall, to short, to tall (again) 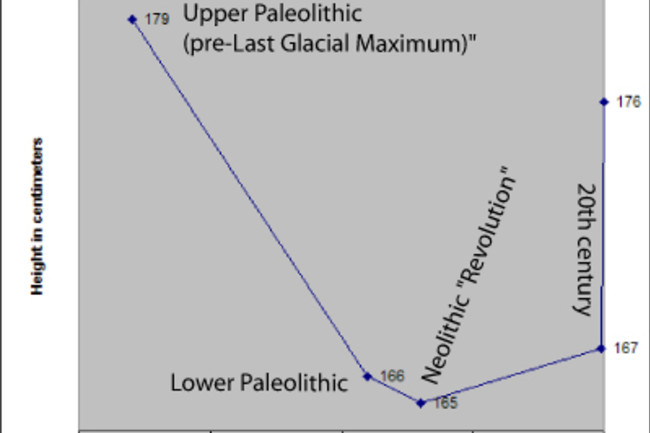 Dienekes reports on a paper which chronicles the change height of "Europeans" over the last 20,000 years ago. Anthropologist Henry Harpending once told me that when the first modern humans arrived in European 40-30 thousand years ago they were as slim and towering as modern Nilotic peoples, in other words, they were evolutionary reflections of the African environment. But soon enough the nouveau Europeans shape shifted and developed a more robust physiognomy, with a reduction in median height. As you can see from the graph which I generated the Neolithic Revolution and the introduction of agriculture was the nadir of physical size, and undernourished reality of the farming cultures of Eurasia was a fact of life until the past century. But, note that even today Europeans are not as domineering in stature as they were 20,000 years ago. Humans have a tendency to view evolution as a progressive force, toward more complexity, size and intelligence. But we aren't sure that this is correct, not only were modern humans larger during the Ice Age, but the largest cranial capacities of any human population can be found among the Neandertals.