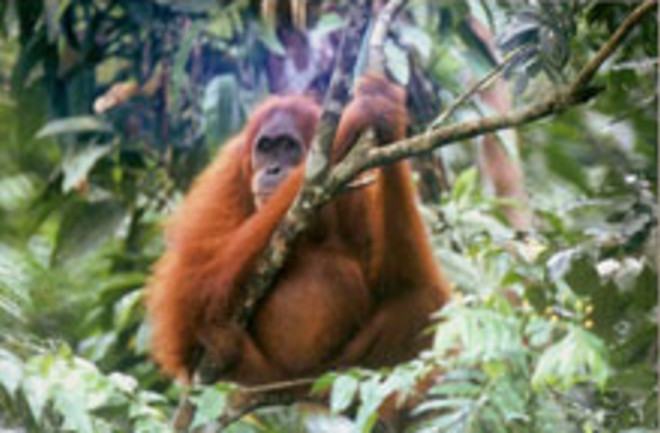 It may seem as though orangutans' 180-pound bodies would be unwieldy when it comes to swinging from delicate tree branches in the rainforests of Indonesia and Malaysia. But the animals have figured out a variety of ways to navigate treetops, allowing them to avoid a potentially deadly fall, according to a study published in the Proceedings of the National Academy of Sciences. When scientists observed wild orangutans in the Sumatran rainforest, they found that the animals traversed the delicate branches by moving their bodies with a rhythm that counters the vibrations of the trees. At the highest treetops in the forest,

tree branches are thin and begin to wobble as animals climb on them, much as a suspension footbridge vibrates as people walk over it. Too much vibration and an orangutan can be thrown off altogether. From high in the trees, such a fall would be deadly [Time]. But because orangutans move with an irregular beat, they avoid compounding the already-shaking branches with the motion of their own bodies.

Also increasing their stability, the animals also have the habit of grasping more than one branch at once--in fact, nearly one-third of the time, orangutans held on to more than four branches simultaneously. The findings are important because a number of factors threaten to make the orangutan the first great ape in modern history to go extinct. Nearby logging can shake already-unstable branches, making it easier for the animals to fall out of the trees. In addition, loss of habitat can force orangutans into areas in which they clash with farmers or lack access to favored food sources. An awareness of how orangutans maneuver through their native environment could assist with conservation efforts.

"Now that we know more about how they move through the trees and the unique way that they adapt to challenges in their environment, we can better understand their needs," [lead author Susannah] Thorpe concluded. "This could help with reintroducing rescued animals to the forests and efforts to conserve their environment" [Discovery News].

Scientists think these techniques are used only by orangutans, because these animals face a weighty challenge when it comes to navigating delicate, wobbly treetops.

Most primates, such as the chimpanzee, make their way through fragile branches by flexing their limbs to bring their body closer to the branch’s centre of gravity. But as the heaviest arboreal mammal orangutans face a bigger challenge [Times Online]. Sadly, based on a 2007 United Nations report that estimated that 98 percent of the forests in Borneo and Sumatra--a sizable chunk of orangutans' natural habitat--could be obliterated by 2022, orangutans could face a greater challenge yet.