Strip away the trendy clothes, the shiny ornaments and the cosmetically enhanced body parts and consider the naked human body. Free of decorations and distractions, what makes one body more attractive than another? According to one group of scientists, symmetry is part of the answer. William Brown and colleagues at Brunel University found that both men and women fancied symmetrical bodies over asymmetrical ones. 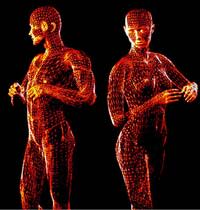 Many animals naturally develop asymmetric body parts; just look at the massive claw of the fiddler crab or the distorted Picasso-like face of the flatfish. But most mismatches are subtler. As a symmetrical animal develops, it is buffeted by outside forces - infections, environmental hardships and the like - that can lead to small differences between its two halves.

These small differences are known as "fluctuating asymmetries" and the theory goes that fitter and healthier individuals are better at buffering themselves against the stresses that produce them. The perfectly mirrored halves of these fittest of individuals are testament to their quality as mates, reflecting both their developmental past and their functional present. For example, symmetrical legs and hips can be signs of steady development, while also bestowing their owners with greater speed and better coordination.

This idea isn't new, but it's still hotly contested. While there is some evidence that it applies to our faces, two previous studies found no connection between asymmetry and attractiveness in our bodies. But measuring attractiveness in humans isn't a simple matter; we are so easily swayed by clothing, skin colour, hairstyles and facial appearances. To get round this problem, Brown worked not with real humans, but with wireframe images. 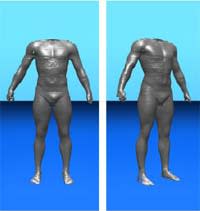 He asked 40 men and 37 women to step into a three-dimensional optical scanner, which created images of their body shape, from head to toe and at very fine resolutions. The real models may have stripped off their clothes, but their digital avatars were stripped further of any cue that could affect their attractiveness, including skin colour and heads.

For each digital model, Brown's group measured the size of 24 different body parts, from neck to bicep to knee, and used these to calculate an overall score of fluctuating asymmetry. He then presented the avatars to a select group of volunteer judges, including 37 men who evaluated the female bodies and 50 women who scrutinised the male ones.

Their judgments show a clear preference for symmetrical bodies in both men and women. Brown found that symmetry was an attractive quality in itself, but part of its charm lay in its association with physical traits that are typically of each gender. Men were more likely to be taller, bigger and have wider shoulders if their left and right halves were also closely matched. Symmetrical women, on the other hand, were more likely to have higher waist-to-hip ratios and longer legs relative to their bodies.

According to Brown, these stereotypical body shapes have been shaped by evolution to the respective needs of their owners. He points to previous research which suggests that larger breasts and smaller waist-to-hip ratios in women are signs of child-bearing potential, while being tall and large gives men an edge in rivalries with other men.

Like symmetry itself, these characteristics could signal an individual's resistance to infections. During puberty, children who fend off parasites and disease with greater ease will be able to channel more energy toward developing more pronounced "secondary sexual characteristics". So the next time you're trying to work out which is your best side, the ideal answer would be "both".