Surveying the Rainforest, Top to Bottom

A two-week-long Bioblitz in Malaysia achieves a comprehensive survey of a nearly untouched rainforest. 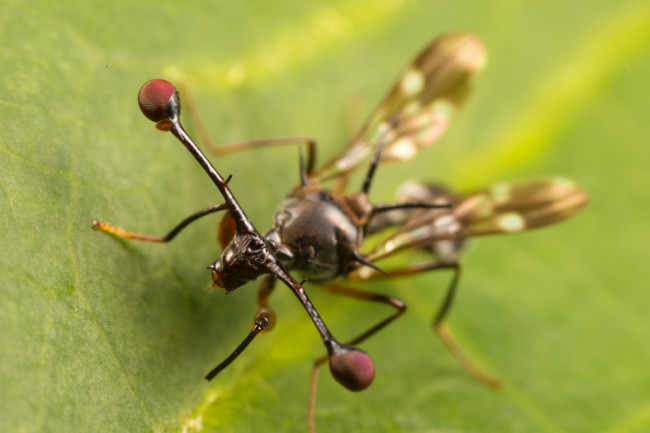 The unique shape of the stalk-eyed fly (Teleopsis quadriguttata) is a classic example of what scientists refer to as “runaway sexual selection.”

Incredibly, the red globes at the ends of those stalks are highly functional compound eyes. Over the course of millions of generations, female preference for males with widely spaced eyes has resulted in this strange and cumbersome trait. 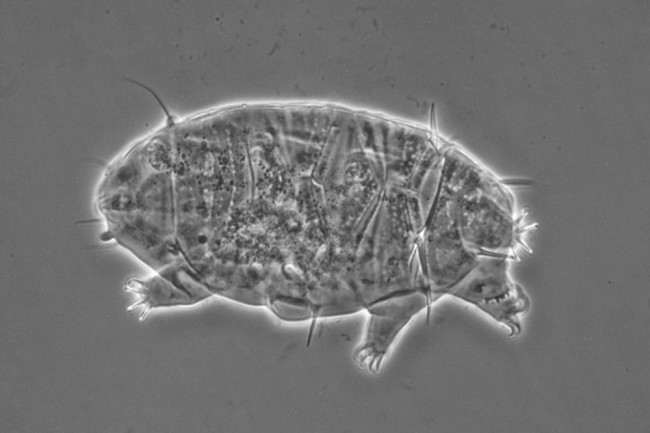 The Bioblitz team also discovered a species of tardigrade, or "water bear," thought to be new to science.

Tardigrades are famed for their hardiness, and are found on all seven continents in locations ranging from mountaintops to hot springs. They like to hang out in moss, though, making the rainforest an ideal habitat as well.

It was just one of the many finds made by researchers and volunteers alike.

"Bioblitzes are a way to allow not only specialized workers to contribute information and to congregate specialized workers in one place at one time, but it also allows non-specialized workers or volunteers or naturalists or just local citizens that are interested in seeing what going on to come out for a day and add their observations to the understanding of everything living in a place at a time," Lowman says. 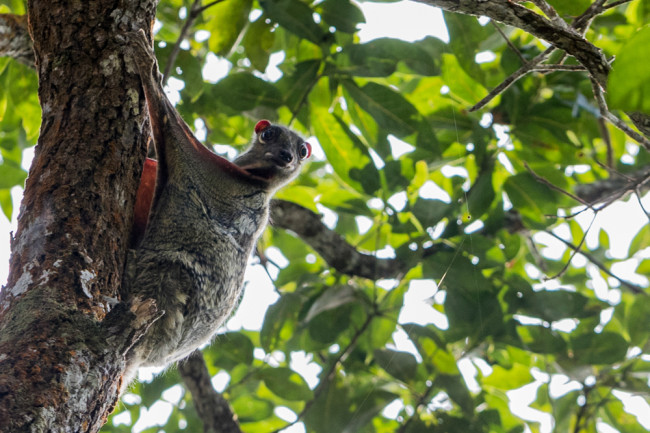 Colugos (Galeopterus variegatus), also called flying lemurs for their ability to glide from tree to tree, are some of the most unusual mammals in the Penang Hill rainforest.

Being shy, nocturnal creatures, they are rarely seen. To aid them in their survey for these and other creatures, biologists used thermal cameras to detect the heat signatures from animals high in the canopy. 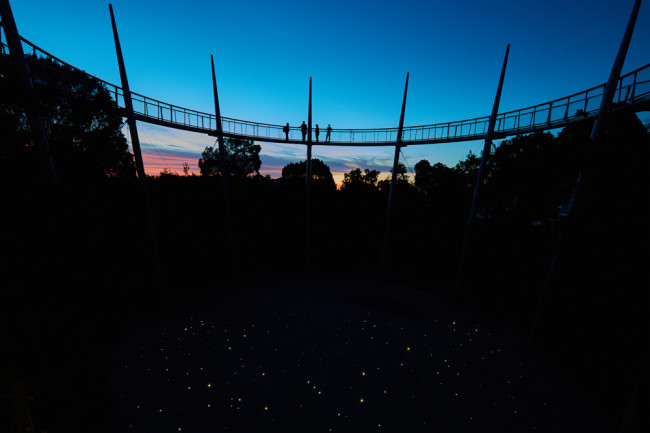 The sun sets over the forest as visitors watch from an elevated walkway that gives access to the canopy.

It's part of efforts to introduce visitors to the beauty of the park, Lowman says. She was initially brought in to help establish the walkway system and has since accepted a position as an adjunct professor there to help further establish the park as a destination for tourists and scientists alike.

A permanent field station in the forest is in the works, and Lowman is currently working to establish the area as a UNESCO World Heritage Site, which would further protect the ecological treasures in Penang Hill. 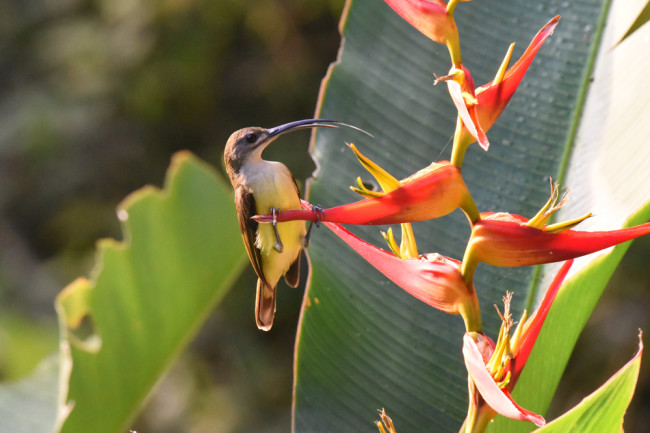 Despite its name, and wicked beak, the Little Spiderhunter feeds on nectar from flowering plants. Its long, curved appendage is specially made to reach deep inside flowers to extract food for itself.

Documenting and capturing so many species meant that researchers had to be in the field at all hours during the Bioblitz. The work was demanding, but rewarding and exciting as well.

"I’d go out on the trail at night and I’d be maneuvering around bat traps, stepping across traps that had been left for flies, mosquito traps were hanging in the trees above me, Esposito says. "It was a really incredible experience to see the evidence of other people working there even if you didn’t see the people directly." 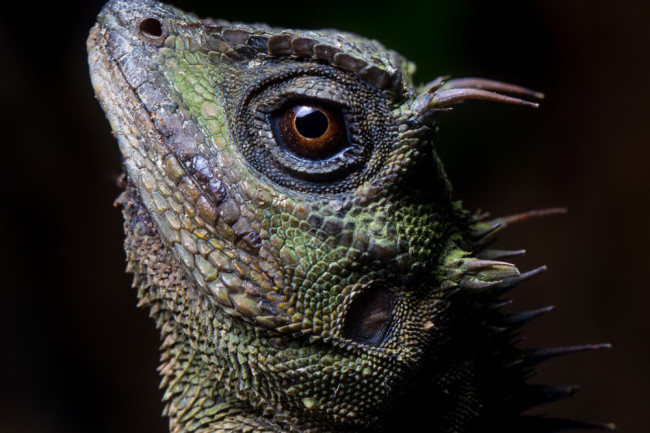 There are dragons in the Penang Hill rainforest. This lizard, known as the armored pricklenape (Acanthosaura armata), has defensive spines running along the length of its back.

The spines provide the lizard with a formidable defense against would-be predators and any unwary scientist wanting to take a closer look. 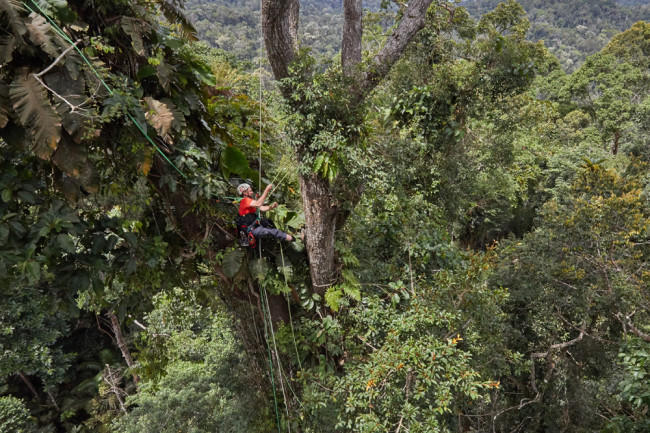 Steven Pearce makes his way into the rainforest canopy during the Bioblitz. The treetops are a rich source of biodiversity, says Meg Lowman, the Academy’s Lindsay Chair of Botany and the expedition leader, but one that often went unnoticed.

"We have this extraordinary place where biodiversity tends to congregate and yet we human beings had not really explored this area until about 30 years ago," she says.

During the expedition's two-week long trip, researchers assisted by experienced tree climbers made dozens of trips into the canopy, finding species there that had only ever been observed at ground level before. 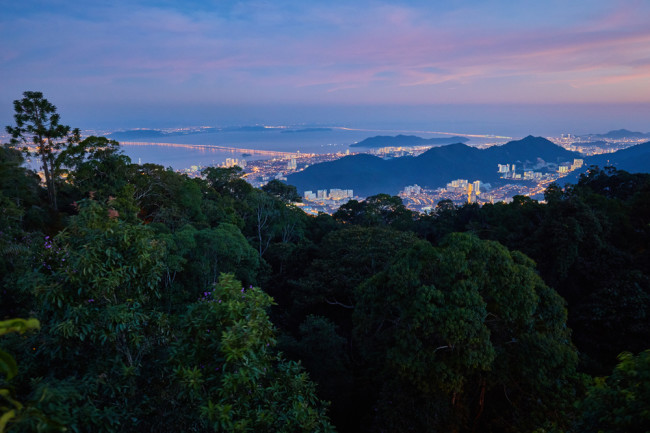 Just miles from a populous metropolitan area, the Penang Hill rainforest is home to an even more cosmopolitan array of organisms. On an island near the Malaysian mainland, a dense tangle of almost 20,000 acres of hardwood trees lies draped across steep hills, promising a tantalizing — and little-studied — habitat for study. Here, more than 100 researchers from around the world gathered in October to complete a top-to-bottom ecological survey known as a Bioblitz, organized by the California Academy of Sciences and local partners.

Over the course of two weeks, arachnologists, primatologists, botanists, entomologists and many more worked day and night to complete a comprehensive survey of every living thing they could find in the forest.

They returned with a list of over 1400 species, including four possibly new to science. Their work also allowed for a rare collaboration between biologists with many different areas of specialization, including explorations into the canopy, where scientists haven't often ventured.

The forest is exceptionally well-preserved, giving researchers a rare opportunity to study an ecosystem that has been mostly untouched by humans for millions of years. Their work will lay the groundwork for establishing the area as a UNESCO World Heritage Site, further protecting the forest and its fragile ecological riches.

These photos originally appeared in bioGraphic, an online magazine about nature and sustainability powered by the California Academy of Sciences. 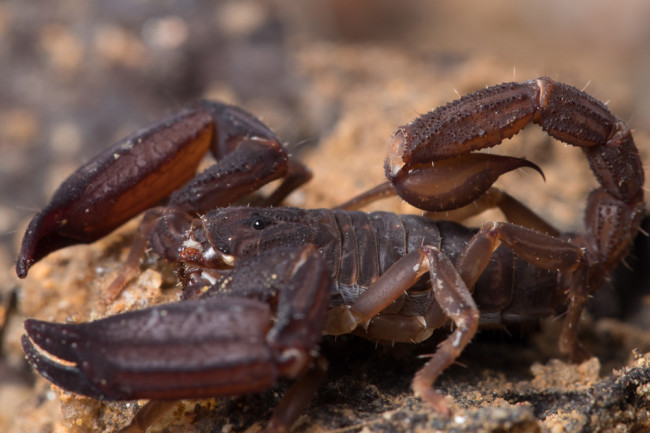 Scientists discover a new scorpion from one of the oldest lineages on Earth. During a nighttime survey of the Penang Hill rainforest, arachnologists Lauren Esposito and Stephanie Loria found this male of a species of scorpion in the family Chaerilidae (a group known as the ghost scorpions) that, until now, was unknown to science. Ghost scorpions, like all scorpions, fluoresce under ultraviolet light, but so faintly that this specimen was an incredibly lucky find.

"It was like a jumping up and down, high-fiving kind of moment," says Lauren Esposito, the Academy's Schlinger Chair of Arachnology. 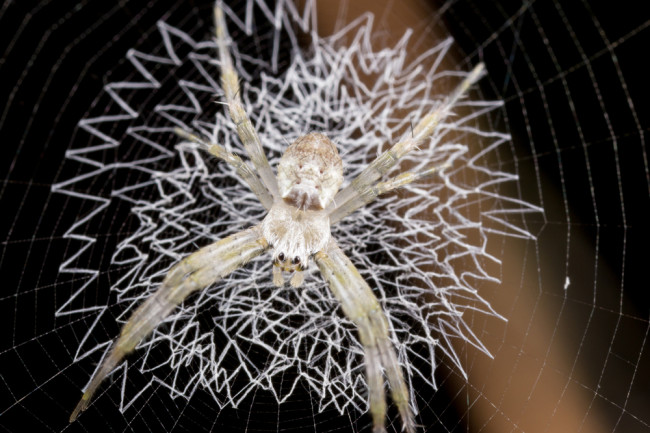 While many spiders construct webs that are practically invisible, some, like this juvenile Argiope versicolor, weave striking geometric patterns at the web’s center.

Known as stabilimentum, these structures were once thought to stabilize the web. While that idea has been debunked, scientists are still not sure what function the decorations serve.

The current thinking is that they either attract prey or help the spider avoid detection by predators by breaking up the spider’s outline. Perhaps it’s both. 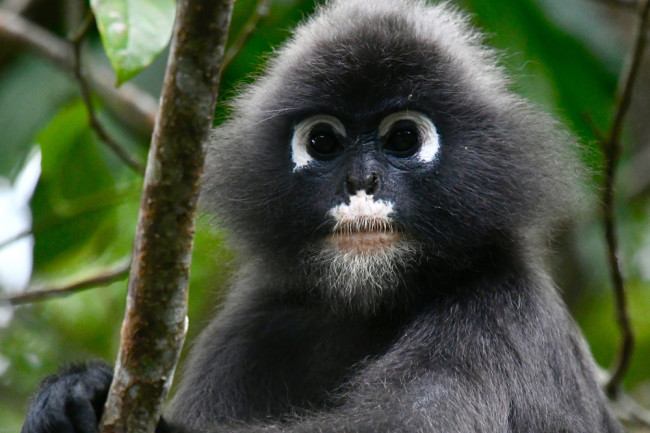 A dusky leaf monkey, or langur. The species is native to Malaysia, and is one of many species that make the tropical nation a hotspot for biodiversity.

Though the Penang Hill habitat has been mostly protected by the fact that Penang was mostly unsettled before the British arrived and an early realization of the forest's botanical value, it's not completely safe.

"If you don't put protection measures in place the threat is always looming, its always there and it can come from any direction, whether that’s deforestation or simply the introduction of something that shouldn’t be there," says Esposito.