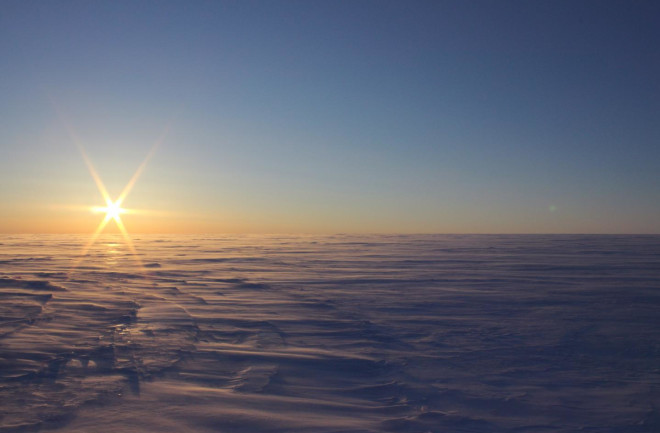 The surface of Canada's Devon Ice Cap. Two lakes likely lie over 2,000 feet below. (Credit: Anja Rutishauser) These days it's hard to find a place on Earth where humans haven't interfered in some way. Venture to the most remote jungle or the depths of the Mariana Trench and you've likely been preceded by some emissary of humanity, whether that's chemicals carried on the wind or something more tangible. But there are places where our long shadow has never reached, where the events of the past 100,000 years might as well have never happened. Locked deep below gargantuan sheets of ice thousands of feet thick in Canada, researchers have discovered what they believe to be two lakes, saturated with salt and closed off from rest of the world for millennia.

Subglacial lakes aren't anything new — hundreds lie beneath Antarctica, and one, Lake Vostok is estimated to be the sixth-largest in the world by volume. For many, their contents have remained pristine by virtue of isolation. Scientists often see them as time capsules, snapshots of global conditions at the time they were closed off. But some function almost as alternate realities. Samples from some of these lakes, such as Vostok, indicate that microbial communities are alive and well under the ice, even without sunlight. These organisms exist, and have existed, entirely separate from the flora and fauna that teem across the Earth — they might as well live on another planet. And that's why these environments, particularly those recently discovered in Canada, are so interesting to researchers. As we think about where in our solar system (and beyond) life might exist, researchers are looking to Earthly environments for inspiration. Chile's Atacama desert, for example, might resemble Mars; hydrothermal vents under the sea might have close analogues elsewhere in the solar system. At the moment, Jupiter's moon Europa looks to be a solid candidate for finding extraterrestrial life. The moon likely has a large, salty ocean beneath an icy crust, which satisfies one of the most basic requirements for life. The water probably interacts with the bedrock, which would allow for crucial chemical reactions to take place. Sadly, sending a mission to Europa, especially one that would actually bore into the ice, would be fairly difficult and isn't likely to happen anytime soon.

And that's where these subglacial lakes come in. Researchers from the University of Alberta and the University of Texas at Austin were conducting radar scans of the terrain underlying Canada's Devon Ice Cap, which lies north of the Arctic Circle near Greenland, when they noticed some unusual signatures. Bedrock normally scatters the signals, but they saw two areas where the signal was reflected with an odd amount of precision. The only explanation that made sense was that two bodies of water, roughly two and three square miles in area respectively, lay deep below, the researchers say. Given the water lies under enormous pressure, with an average temperature well below freezing, the researchers say that it must be highly saline to remain in a liquid state. Based on models of the glacier at that depth, salt levels must be around four or five times that of the oceans, according to the researchers. They published their research Wednesday in Science Advances. The salt probably comes from the bedrock the lakes are in contact with, they say, making them an outlier even among subglacial lakes. Just one other hypersaline lake, under Taylor glacier in Antarctica, is known to exist, and these newly discovered lakes may be even saltier. While the researchers have no set plans at the moment to sample water from the lakes for microbes, the environment makes it an ideal model for other salty oceans in the solar system. If life exists in such environments here on Earth, it's an indication that it could do so elsewhere as well.