Studying Biology in Real-Time, and In Situ, With a Fluorescent Beacon 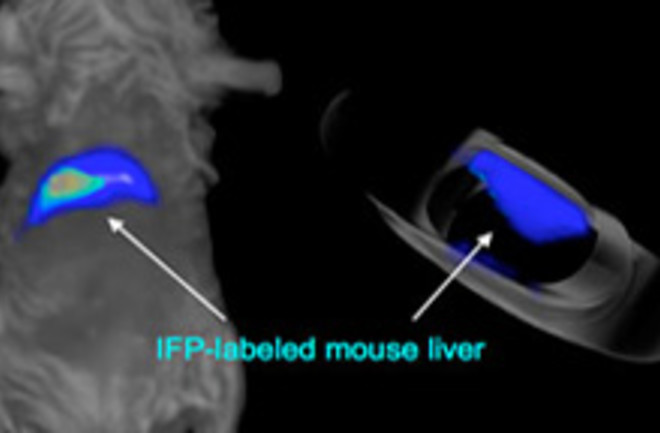 When the liver of a live mouse began to glow with infrared light, researchers knew they'd gotten it right. In a new study, biochemists developed an imaging technique that will allow scientists to get an unprecedented look at biological processes going on in real time, and within the body of an animal rather than inside a petri dish. The new technology builds on earlier work with fluorescence.

Fluorescent proteins, which are compounds that can absorb and then emit light, have become a powerful instrument in the cell biologist's toolkit—so powerful, in fact, that the discovery and development of green fluorescent proteins from jellyfish earned the 2008 Nobel Prize in Chemistry [Scientific American].

But although these green fluorescent proteins have become an indispensable tool in biological research, functioning as glowing markers of particular cells or proteins, the technology

has its limits. The wavelengths of light it emits and light used to observe this emission are quickly absorbed by cells, making it difficult to study living cells except in laboratory tissue cultures, microbes and extremely tiny animals [Wired].

In the new study, published in Science, lead researcher Xiaokun Shu found a fluorescent protein in the bacteria Deinococcus radiodurans that glows with infrared light.

Bacteria do not actually use this class of proteins, called bacteriophytochromes, to emit light. "They use these bacteriophytochromes to control gene expression,” Shu says—the proteins convert absorbed light into energy to signal certain genes to turn on or off [Scientific American].

However, the researchers were able to re-engineer the protein so that emitted the light instead.

Because infrared can pass through tissue more easily than visible light can, the advance should allow researchers to trace individual molecules throughout the bodies of mice and other small, live animals [ScienceNOW Daily News].

While the infrared signal is still fairly weak, Borisy notes that

"it's an excellent start on which to build further development" [The Scientist].