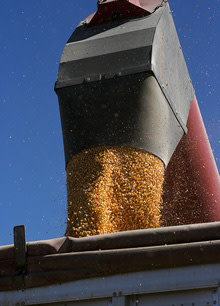 You may not want to think about what goes into your fast food, but a new study may at least put your overactive imagination to rest: It's mostly corn. The researchers analyzed hamburgers, chicken sandwiches, and fries from McDonald's, Burger King, and Wendy's and determined that nearly all of them could be traced to the corn industry-- in the form of corn feed or corn-based oil.

"If you put any money into fast food, it all goes back to corn, everything. The first step to making hamburgers is making an ear of corn," said Hope Jahren, lead author of the study [Des Moines Register].

The researchers traveled to Los Angeles, San Francisco, Denver, Detroit, Boston and Baltimore, purchasing feasts of fast food at multiple restaurants in each city. Samples of beef, chicken, and fries were then ground up and analyzed for levels of isotopes. Specifically, they were looking for carbon-13, which is a unique signature of corn, and nitrogen-15, which is found in fertilizers and animal excrement. Based on the high levels of carbon and nitrogen isotopes found in the meat products, the authors claim that the cattle and poultry were predominantly fed corn, which makes them as fat as possible in as short a time as possible, and were raised in extreme confinement [

, keeping the animals in close contact with their own excrement. The high nitrogen-15 content also suggests the corn fields were heavily fertilized with nitrogen-based fertilizers.According to the study published in Proceedings of the National Academy of Sciences [pdf], all of the 160 beef patties tested, except for 12 from West Coast Burger Kings, were made from exclusively corn-fed cattle, and all of the chicken patties were made from exclusively corn-fed poultry. The findings weren't shocking, as it's already common knowledge that corn is cheap, partly due t

But researchers say the extent of the fast food industry's reliance on corn is noteworthy. The fries from Wendy's were also found to be fried in corn-based oil, while McDonald's and Burger King fries sizzled in other vegetable-based oil.

The researchers say the study isn't meant as a warning against corn, but rather a criticism of the lack of transparency in the food production process. Marion Nestle, a nutritionist at NYU, agrees, "I don't think this paper should be interpreted as further evidence that corn is poison. I think the point the authors are trying to make is that most people aren't aware of the extent to which corn ingredients permeate the food supply" [Des Moines Register].

However, when questioned about the new findings, the American Meat Institute disputed the need for additional consumer information on the sourcing of fast food products, noting that consumers "appear satisfied with the current nutrition and ingredient information available upon request or on signage in restaurants" [LiveScience.com].

To complete the fast food corn-fest, the researchers could have tested soft drinks, where they would have found corn lurking too -- in the form of high fructose corn syrup. Related Content: DISCOVER: What The World Need Now is Low-Carb Corn DISCOVER: The Corn War RB: Legislating Obesity: South L.A. To Ban Fast Food Joints?