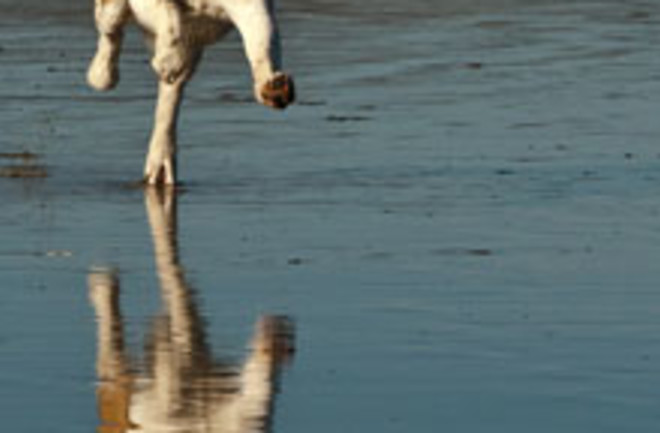 At some point in evolutionary history dogs diverged from wolves thanks to domestication by humans. But just where did dogs first become man's best friend? Robert Wayne and his team have many years invested in answering the question, and their newest findings, published this week in Nature, suggest that the answer is the Middle East.

Researchers looked at gene segments from 912 dogs, from 85 breeds, and samples of 225 grey wolves, dog's close cousins who they evolved from in prehistory, from 11 regions [USA Today]

. Dogs and wolves that come from the Middle East, Wayne says, show the most genetic similarity. The researchers propose that dogs were first domesticated there, and then spread outward. Dogs and wolves are closely related enough that they have interbred at various times, complicating the problem of unraveling dogs' origin. Wayne's team suggests that after the domestication of dogs in the Middle East, they interbred with wolves when they reached East Asia, which is how dogs and wolves there came to share some of their genetics. Indeed, previous research had suggested East Asia as the origin of dog domestication, as breeds from there showed the most genetic diversity.

But Wayne says those papers focused on a small subset of DNA called mitochondrial DNA, instead of looking across all 2.4 billion letters that make up the dog genome [NPR]

. But Peter Savolainen, one of the scientists arguing for East Asia, says he wasn't moved by Wayne's new study. Savolainen says

it did not sample dogs in East Asia from south of the Yangtze, the region where the diversity of mitochondrial DNA is highest. Also archaeologists in China have been less interested in distinguishing dog and wolf remains, he said [The New York Times]

. So this study won't be the final word. But what's not in doubt is the importance of dogs to early human civilization (that is, once the domesticators selected for small body size and other characteristics you'd want to make best friend that doesn't eat you).

Dogs could have been the sentries that let hunter gatherers settle without fear of surprise attack. They may also have been the first major item of inherited wealth, preceding cattle, and so could have laid the foundations for the gradations of wealth and social hierarchy that differentiated settled groups from the egalitarianism of their hunter-gatherer predecessors [The New York Times]

. Related Content: 80beats: Where Did Dogs First Become Man's Best Friend? 80beats: Wolves Have Dogs to Thank for Their Dark Fur 80beats: Hairless Dogs Give Up the Genetic Secret of Their Bald Glory DISCOVER: The Genetics of… Dogs DISCOVER: Ascent of the Dog