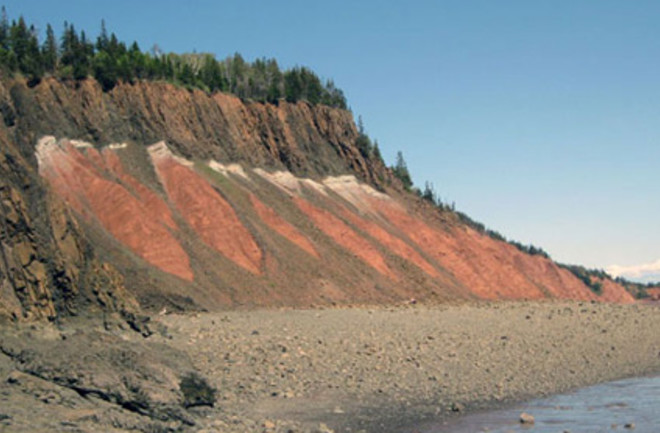 Earlier this month, a study in the journal Science tried to put to bed for good the question of dinosaur extinction: It was an impact from space, not large-scale volcanic activity, that wiped them out 65 million years ago, the study argued. That's all well and good for the dinosaur's end, but what about their beginning? This week in the Proceedings of the National Academy of Sciences, paleontologists say they've studied the period about 200 million years ago when dinosaurs first came to power, and found that while catastrophic volcanic activity may not explain dinosaur extinction, it could have explained why dinosaurs' competitors disappeared and the terrible lizards took over the planet. Around the time of dino emergence, the continents were all locked up in the supercontinent Pangaea. As it pulled apart, researchers say the seismic activity gave rise to hundreds of thousands of years of volcanic activity, creating lava fields on the surface of the Earth the size of the continental United States. For this study, Jessica Whiteside and colleagues surveyed wood remnants, wax from ancient leaves, and whatever else they could extract from the volcanic flow's remains to reconstruct what was happening in the climate of this period.

The scientists examined how two different isotopes (or forms) of carbon fluctuated during these volcanic eruptions. They found that the "heavy" form of carbon was depleted relative to the "light" form. They say this reflects disturbances in the carbon cycle at this time, including a spike in atmospheric carbon dioxide (CO2) and aerosols (fine solid particles) [BBC News]

. That finding, Whiteside says, reinforces the connection between volcano-induced runaway global warming and the great extinction 200 million years ago, which marks the boundary between the Triassic and Jurassic periods and the ascendancy of the dinosaurs.

Before the rise of the dinosaurs, the animal world was dominated by crurotarsans, ancient relatives of modern crocodiles. But as their populations crashed, early therapods, the group of dinosaurs that includes all meat-eating species from Velociraptor to Tyrannosaurus rex, gained ground and thrived [The Guardian]

. This leaves at least one burning question, though: If raging volcanoes and lava flows the size of the United States made the planet hot and inhospitable, why did the dinosaurs survive while their competitors vanished? Scientists who study the crurotarsans found that they

evolved at a similar rate as dinosaurs, who were not superior except for having evolved slightly more rapidly. The researchers also found that there were more varieties of crurotarsans, who were also more numerous and more adapted than dinosaurs, and thus had greater chances of prospering and ruling on Earth [AFP]

. Thus, Whiteside says, it might have been no more than dumb luck that permitted dinosaur survival—and world domination. Related Content: 80beats: Rock-Solid Science: A 6-Mile-Wide Space Rock Did Wipe Out the Dinosaurs, Experts Say 80beats: Forget “The Asteroid”: Could Supervolcanoes Have Killed the Dinosaurs? 80beats: In the Permian Period, Erupting Super-Volcanoes May Have Killed Half the Planet 80beats: Dinosaurs Ruled the World Because They “Got Lucky,” Say ScientistsImage: Jessica H. Whiteside (Site in Nova Scotia, Canada. The end-Triassic layer is in white.)