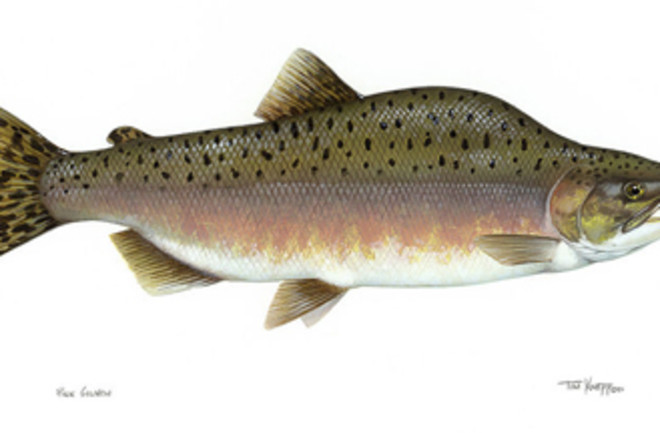 The wild pink salmon of western Canada are in trouble: In the early 2000s, their numbers in some locations swiftly dropped by 90 percent or more. One explanation put forth for this steep population decline is that sea lice, parasites ubiquitous on farmed salmon, jumped to the wild variety of the fish. But this week in the Proceedings of the National Academy of Sciences, a new study casts doubt on that idea and says the sea lice are not to blame.

When Gary Marty of the University of California, Davis, and his colleagues looked at that aspect for the Broughton Archipelago of western Canada, they found that salmon survival was not lower in years when the juveniles passed by louse-infested farms. This, they say, suggests that something other than sea lice must be reducing survival rates. [New Scientist]

Marty's team checked up on a decade worth of data dating back to before the 2002 crash, and found a few interesting things. First, they say, the predominance of the lice in wild populations appears to predict the number found in farms a little later, suggesting the parasites travel from wild salmon to farmed ones and not the other way around. Second, they argue, it does appear that a high number of lice in the farmed fish predicts higher than normal exposure for the juveniles of the wild variety, but that increased exposure can't account for the huge population drop in the wild salmon.

"Based on extrapolations from controlled laboratory studies, infestation levels... might have killed 8% if the juvenile salmon [leaving the area]." In other words this was not enough to destabilise the wild population, they added: "Death caused by sea lice exposure replaced death caused by other causes, resulting in no net change in generational survival." [BBC News]

But if not sea lice, then what killed so many wild salmon

in so short a time?

Marty suggests that the 2002 crash was due to some unrelated cause, perhaps a virus or bacterium. He admits that it is possible that sea lice were part of a combination of factors that led to the declines; perhaps lice or viral infection alone aren't enough to kill that many fish, but if both occur in the same year, many juveniles die. However, he doesn't think that this is likely. [Nature News]

Marty notes that many of the sick wild salmon showed reddening or bleeding at the base of their fins—an ailment associated with environmental stress or infection, not with the sea louse parasite. Plus, though the sea lice are a salmon parasite, the salmon also like to eat the sea lice, which could help them fight off its parasitic effects. For his part, Martin Krkošek—the researcher whose earlier study said that wild salmon in rivers that were exposed to farmed fish populations tended to decline—isn't convinced. Krkošek argues that the new study is too limited by studying just the Broughton Archipelago location, and says that its statistical connections aren't convincing. Related Content: 80beats: FDA Says Genetically Modified Salmon Is Safe to Eat; Decision Looms

80beats: Can Endangered Bluefin Tuna Be Saved by Fish Farming?

80beats: Are Fish Farms the Answer to World Hunger or a Blight on the Oceans?