Study: How Suspects' DNA Traces Can Reveal Their Hair Color 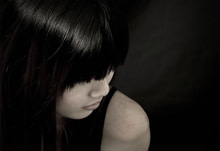 However far-fetched some of their science has been, the barrage of forensic science TV shows during the last decade has ingrained into people the idea that even the most cautious criminals (we're looking at you here, Dexter) leave something of themselves behind at the scene of the crime. And thanks to the march of genetic science and sequencing, those bits of someone can tell more and more about them. Even their hair. In a study coming soon to the journal Human Genetics, Manfred Kayser and colleagues identify genetic markers that can predict a person's hair color.

The researchers studied DNA and hair colour information from hundreds of Europeans. They investigated genes previously known to influence the differences in hair colour. "We identified 13 'DNA markers' from 11 genes that are informative to predict a person's hair colour," said Professor Kayser. [BBC News]

The researchers report that examining these 13 markers let them predict red and black hair with about 90 percent accuracy, and blond and brown at about 80 percent.

"That we are now making it possible to predict different hair colors from DNA represents a major breakthrough because, so far, only red hair color, which is rare, could be estimated from DNA," said Manfred Kayser, head of forensic molecular biology at the Erasmus Medical Center in the Netherlands. [LiveScience]

Having a good guess that you're searching for someone with jet black locks rather than a strawberry blonde is no guarantee to catching a crook (especially if the hunted is a hair dye enthusiast), but it's yet another secret that DNA could spill.

The same team has also studied eye color prediction using DNA, and in November, Erasmus MC researchers published a study detailing how to estimate age on the basis of DNA material. Certain immune-related DNA molecules inside blood cells decrease with age, according to the researchers. [Popular Science]

80beats: Forensic Scientists Can Tell Your Age from a Drop of Blood

80beats: Could Forensic Scientists ID You Based on Your “Bacterial Fingerprint”?