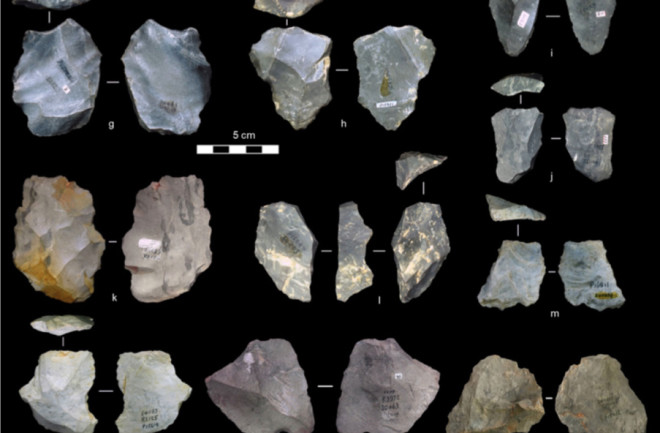 To the untrained eye, stone tools look a lot like old rocks. But to an archeologist, stone tool surfaces provide important clues about the technological advancements of their crafters.

The history of stone tool making dates back to 3 million years ago. As our ancient predecessors evolved, their tools changed, too. And a more complex toolmaking style, known as the Levallois technique, emerged in Africa and Europe around 300,000 years ago. Researchers assumed the West introduced this more sophisticated approach of toolmaking to the East just 30,000 years ago. However, a team of researchers say they’ve dated 45 Levallois style stone tools from China that range from being 80,000 to 170,000 years old. This suggests the revolutionary approach developed in China independent from outside influences, just as it did elsewhere.

Archeologists classify stone tools based on a framework representing five modes of technological progression. Levallois, or Mode III tools, are considered a more sophisticated approach to tool manufacturing than the simpler, oval-shaped stones of earlier periods. The knapping process of Levallois tools produced flakes, which were used to spear, slice, scrape or dig.

Previous archeological evidence supported the idea that the inhabitants of China somehow leaped from making Mode II tools, which were stone hand axes, to Mode III and IV tools at around the same time. Researchers previously thought that early humans migrated from Europe or Africa around 30,000 years ago and brought advanced toolmaking with them. However, the discoveries made by Bo Li, a researcher at the University of Wollongong in Australia, and his colleagues seems to close this gap in China’s archeological record. They published their findings in Nature this week.

The Levallois tools examined in this study were among thousands of artifacts and fossils found in southwest China’s Guanyindong Cave in the 1960s and 70s. Uranium-series methods dated the site to be between 50,000 and 240,000 years old. But the exact age of the stone tools weren’t clear until Li and the team took another look using more advanced dating methodology.

“These tools are only important if they are old,” Li said. “The newly developed dating technique is crucial to constrain the age of these tools.”

The team used optically stimulated luminescence to date sediment found on and near the tools. This approach can determine when a sediment sample was last exposed to sunlight and how long an artifact may have been buried under layers of sediment.

Li doesn’t know if Neanderthals, Homo sapiens or another species created the tools. Neither DNA evidence or bones have been unearthed at the site. However, Li hopes the study kindles interest in learning more about the early inhabitants of this part of the world.

“I hope our findings will stimulate new waves of excavations and studies in this region to answer this question,” he said.