Anthropologist Erik Trinkaus of Washington University in St. Louis has found evidence of kindness among ancient cave dwellers. A fossilized jawbone excavated from a cave in southern France shows that somebody was nursing the old and infirm some 200,000 years ago. The jaw contains the remains of just a few broken roots of teeth and evidence of huge abscesses. Yet this man survived long enough for bone to grow in and refill the sockets, something that could have happened only if he had gotten a little help from his friends. "You never see that sort of thing in nonhuman primates. When a monkey loses its teeth, it dies," says Trinkaus. 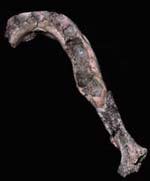 The caveman's friends or family would have had to spend a lot of time either pre-chewing food or grinding it with stone tools, says Trinkaus. "Bones found at the site tell us they were eating wild goat and horse on the hoof, which has the consistency of old shoe leather."