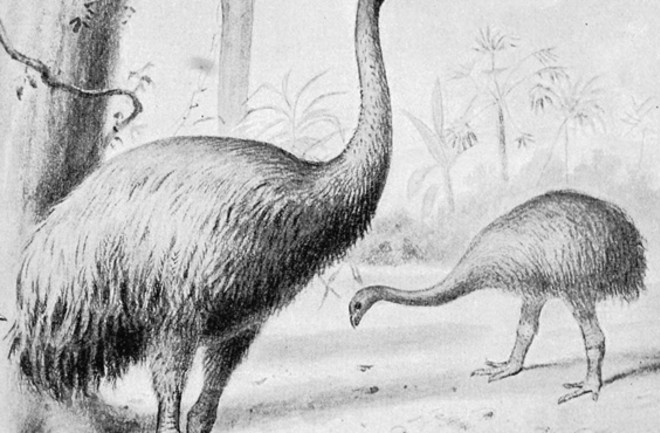 An illustration of giant moas. (Wikimedia Commons) Coprolites, or fossilized dung, double as ecological time capsules, preserving an incredible collection of information about past ecosystems. In Middle Earth (a.k.a. New Zealand) researchers from the University of Adelaide’s Australian Centre for DNA (ACAD) and Landcare Research NZ reconstructed a pre-civilization community using a bird dung time machine. Dung samples were amassed from numerous sites across the continent. The donors: four species of ratite birds including the extinct giant moa and the critically endangered kakapo parrot, all of which are endemic to the continent. In its heyday, the moa was the dominant herbivore in New Zealand. New Zealand has a wet, rainy history, and it’s likely birds like the moa would hide out in caves or rock shelters to stay dry and, of course, defecate often. Some of these hideouts were arid enough to dry out the dung and preserve them. Jamie Wood, of Landcare Research, organized a dung hunt for his PhD research, pinpointing the places where animals took shelter. Then, he dug in. “When he started his PhD he had 30 dung balls, and when he finished he had around 3,000. So he’d gone out and completely changed our record of moa coprolites,” says Professor Alan Cooper, the ACAD director who led the study. Using radioactive dating, they determined their dung collection spans a timeline reaching back 1,500 years. Tales from the Dung Side Genetic analysis of the dung revealed information about the birds’ diet and health, which allows researchers to better understand their behavior. Parasites in the dung can reveal how they were shared and how the birds migrated. “All those types of information you can’t get from skeletons,” says Cooper.

A key finding from dung was the symbiotic interactions between species. For example, researchers confirmed that Moas were eating a large proportion of brightly-colored fungi sprinkled all across New Zealand. These fungi form a mutualistic relationship with the roots of the southern beech, which comprises about half of New Zealand’s forest canopies. The fungus doesn’t disseminate spores by popping open, so something must have been eating them to disperse the seeds. The study confirmed that both the moa and the kakapo were consuming the fungi, and presumably spreading them around when they pooped. And that might be particularly important for allowing the forest to re-establish in areas after ecological disruptions. In New Zealand’s history, cold phases were common which removed most of the forests. The team hypothesized that the Moa was very important for moving the seeds of the beech forest back up into these devastated areas. “It’s quite hard for the beech seeds, which are round nuts, several millimeters in diameter, to go uphill. And so, what the dung is showing us is the kind of way most ecosystems work, how different factors, different parts of it sit together,” says Cooper. The team published its findings Tuesday in the journal PNAS. And that’s important for trying to work out how the pieces were meant to fit together and what functions have been lost in systems disrupted by human activity. Cooper says that what they’re currently working on now is aiding conservation efforts by adapting certain animals to take up this vital role, or by co-dispersing the mushrooms and the beech seeds in the fertilizer as a technique to try to improve beech forest regeneration.