Stealthy alligators dive, rise and roll by moving their lungs

Crocodiles and alligators are the epitome of stealth. They can wait motionlessly for prey on the surface of the water, dive to the bottom, or roll around the length of their bodies, all without creating a single ripple. 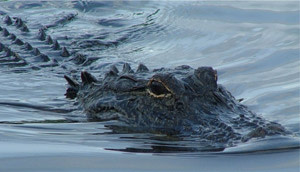 This sneaky manoeuvrability is all the more impressive for the fact that a crocodilian can pull it off without moving its legs or tail. It's particularly difficult because a waiting crocodilian has to move slowly and methodically, and must make do without the helpful forces of lift and drag that accompany faster movements.

Now, for the first time, we know how they do it. They use their lungs like floats, and shift them about their torso using four sets of muscles. If the lungs are pulled back towards the tail, the animal's centre of buoyancy shifts backwards and it dives; if they are shoved towards the head, it rises; push them to the side and you get a roll.

The same muscles that help an alligator to swim without disturbance also allow it to breathe. When it animal inhales, the external intercostal muscles that connect its ribs swing them outwards and forwards to accommodate the extra air. The gator's belly also expands thanks to the ischiopubis muscle; when this contracts, one of the gator's jointed hip bones swings downwards and pushes the abdomen out. 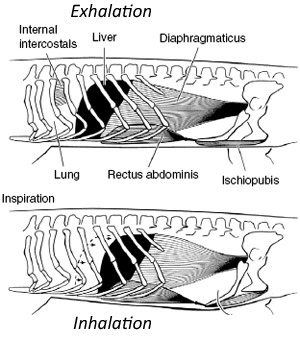 When the gator exhales, the internal intercostals swing the ribs inwards and backwards, while the gator's rectus abdominis (its version of our six-pack) contracts, pulls the hips forward and draws the belly in.

But the main player is the large diaphragmaticus muscle which runs from the hip to the liver, enclosing the stomach and intestines along the way. It also contracts when the gator takes a breath and pulls the liver towards the tail. The liver is directly connected to the lungs and when it moves, so do they.

The hips, muscles and liver all act like a massive piston that shunts the lungs back and forth across the alligator's chest, moving its centre of buoyancy with them.

TJ Uriona and C.G. Farmer from the University of Utah surgically attached electrodes to these muscles in five young American alligators (Alligator mississippiensis), and monitored their contractions as the youngsters swam about a small tank.

As expected, they showed a regular cycle of activity as the animals breathed in and out. But even though some of the muscles are used for inhaling and some for exhaling, Uriona and Farmer found that all four sets - the intercostals, ischiopubis, rectus abdominis and diaphragmaticus - contracted as the animal dived. That drew the lungs backwards, made the tail end more buoyant and allowed the alligator to dip its head under the water.

To make the dive easier, Uriona and Farmer made the gators front-heavy by duct-taping small weights to the underside of their jaws. Sure enough, when the weighted animals dived, the torso muscles were less active. When they had weights taped to their tails instead, the opposite happened. The gator had to shift its lungs even further back to pitch its head forward, and accordingly, the torso muscles worked harder than normal.

Uriona and Farmer also found, for the first time, that an alligator can contract the right and left halves of the diaphragmaticus and rectus abdominis muscles independently, which explains its infamous ability to roll. By contracting these muscles on only one side of its torso, it shifts its lungs to the other side and its body starts to rotate.

Using the position of the lungs to manoeuvre in the water seems to be a fairly common strategy among aquatic animals. Frogs, salamanders, turtles and manatees have all evolved their own ways of doing this and while the salamanders rely on a piece of cartilage to do the job, the others use diaphragm-like muscles, just like alligators and crocodiles.