Staying out of the arms race, or when evolution goes “meh” 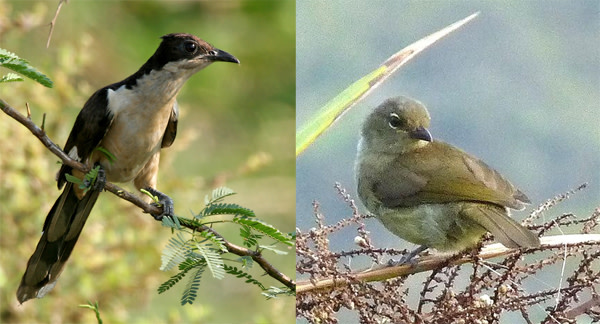 "He who knows when he can fight and when he cannot will be victorious." – Sun Tzu, The Art of War

Some battles aren’t worth fighting. The rewards of victory are too small or the costs of combat are too high. Good generals know this, and so does evolution. The natural world is full of intense arms races

between predators and prey, hosts and parasites. If one side evolves a small advantage, the other counters it with an adaptation of their own, and both species are locked in an ever-escalating stalemate. But sometimes, these arms races never take off. The costs of engagement just aren’t worth it. Oliver Kruger

from the University of Bath has found one such example in South Africa, where a small local bird called the Cape bulbul

is plagued by the Jacobin cuckoo

. Like many other cuckoos, the Jacobin is a “brood parasite”, an animal that relies on others to rear its young. It lays its eggs in a bulbul nest, palming off its own young to unwitting surrogate parents. Cuckoos and their hosts are usually excellent examples of evolutionary arms races

. Over time, the cuckoo eggs evolve to look like the eggs of their hosts. In turn, the hosts evolve a sharper eye to tell the difference between the fakes and their own young. But that’s not the case for the Jacobin. Its egg is twice the size of a bulbul one, and its white shell stands out among the speckled brown colours of the others in the nest. It should be very easy for a bulbul to recognise and deal with the interloper. But instead, it doesn’t harm the egg and its feeds the hatchling as if it were its own. Why? 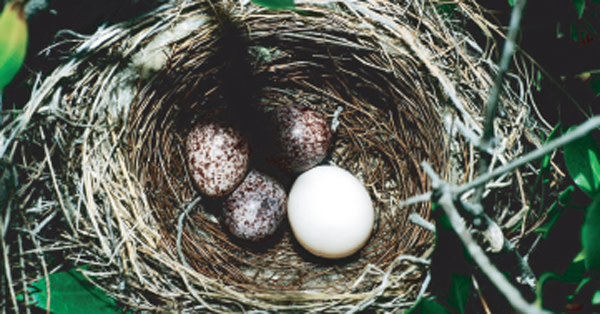 It’s certainly not because the cuckoos are rare or benign parasites. On average, they lay their eggs in one of every five bulbul nests. Many of them lay their eggs mid-flight, and the careening egg often cracks a bulbul one on impact. When it hatches, the cuckoo chick outcompetes the young bulbuls by begging for food more loudly and persistently. All of this takes its toll on the bulbuls. In a breeding season, they have a 73% chance of raising one of their own chicks until it can fly. If there’s a cuckoo in the nest, those chances fall to 19%. Once the cuckoo egg is inside the nest, the bulbul can’t do anything about it. It’s too big to push or pick up, and its reinforced shell is too thick to puncture. But why doesn’t the bulbul just leave the nest and start afresh, rather than stay and raise someone else’s chick? Kruger has the answer, gleaned through twelve years of watching these parasites. As the breeding season continues, from August to December, life gets a lot harder for the bulbuls. The odds that their nests will be attacked by predators rise from around 20% in August to around 90% in December. Likewise, the odds of being targeted by a cuckoo are virtually zero in August, but around 40% by November. For a bulbul, the costs of abandoning a nest and starting anew are huge. It might leave behind a cuckoo-infested home, only to set up another one. On top of that, Kruger found that the adult cuckoos are rather inefficient parasites. Their eggs need to hatch either before the bulbul’s ones or at the same time. But some cuckoos have such rotten timing that they lay the eggs in nest that already have bulbul chicks in them. And some of the eggs fail to hatch at all.This means that a bulbul that deserts its nest at the first sign of a cuckoo egg might abandon a perfectly good clutch for nothing. Kruger plugged all of his data into a mathematical model, which showed that it’s always better for the bulbuls to accept the cuckoos rather than fleeing to a separate nest. Their behaviour might seem strange and ineffective to us, but it’s actually the best available option. There are probably other similar examples in nature. The dunnock, for example, accepts eggs from the common cuckoo, even though they look completely different to dunnock eggs. Scientists often suggest that the host birds are suffering from an “evolutionary lag”. The cuckoos have only recently started to victimise them, and they haven’t had the chance to evolve a counter-measure. But Kruger’s study offers an alternative explanation: cuckoo victims might be better off making the best of their bad lot. If this all makes the poor bulbuls seem like hapless patsies, think again. Kruger repeatedly writes that they have evolved no defence against the cuckoos, but I don’t think that’s strictly true. They might not do anything once the egg lands in their nest, but Kruger mentions that they will viciously attack any cuckoo that flies nearby. In fact, their assaults are one of the reasons why the cuckoos have to lay their eggs mid-flight, often with males and females cooperating to create an opening. This might also explain why the cuckoos are so poor about their timing. Once the egg is laid, the bulbuls have no choice but to accept it. It doesn’t suit them to engage in an evolutionary arms race at that level. Instead, their best strategy is to focus their efforts on preventing the “infection” rather than curing it. In time, the cuckoos might evolve their own counter to the bulbul’s aerial aggression. In 2008, Nick Davies showed that the common cuckoo looks so much like a sparrowhawk

that many small birds mistake the two species and abandon their posts when a cuckoo approaches. However, the reed warbler, one of the cuckoo’s favourite hosts, has learned to tell the difference. They’ll flee from stuffed hawks but violently attack stuffed cuckoos. Their arms race has shifted from the nest to the skies. Reference: Proc Roy Soc B http://dx.doi.org/10.1098/rspb.2010.2629