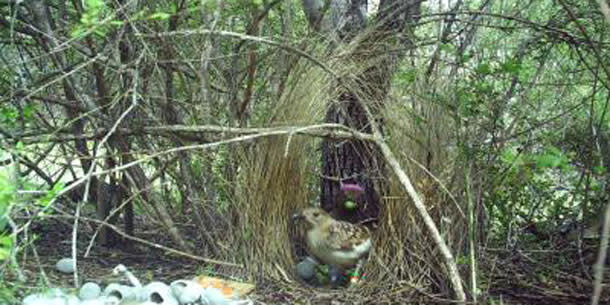 The sexual success of the male spotted bowerbird depends on his gardening skills. In his patch of forest, where he displays to mates, he cultivates a small fruiting shrub called the ‘bush tomato’, with purple flowers and green fruit. It’s not clear if his actions are deliberate or inadvertent, but it is clear that he doesn’t eat the fruit. The plant is there to provide him with decorations, to make his boudoir that much more enticing to a female. Aside from humans, the spotted bowerbird is the only other animal that grows a plant for purposes other than food. Bowerbirds are both superb architects and interior designers. The males build elaborate structures called bowers, which they use as arenas for courtship displays. They decorate their creations with found objects, and each species has its own quirky preference. The satin bowerbird likes blue objects. The Vogelkop bowerbird prefers a mix of fruit, insect parts, leaves and miscellanea, as long as they are neatly arranged. The spotted bowerbird prefers green and white objects, and he has a particular thing for fruit. He places it in the avenue leading up to his bower, and he dances with it in his bill when a female arrives. While most bowerbirds forage for their decorations, the spotted bowerbird grows his own. Joah Madden has been studying one population of these birds in Australia’s Taunton National Park. He found that the males don’t build their bowers in places that already have lots of bush tomatoes. Instead, the plant becomes more common after the males move in, quadrupling in numbers within a 10 metre radius. While watching the birds, Madden never saw one actually eat the fruit, and he never found the plant’s seeds in the bird’s droppings. The bush tomato is purely for show. The fruitier a male’s bower is, the more sex he gets. And the more bush tomatoes he has nearby, the more heavily decorated his bower becomes. A male will stay in the same bower for up to 10 years, so it pays for him to have a ready supply of ornaments around. [embed width="610"]http://youtu.be/smXcYZfidCM[/embed] For now, it’s not clear how deliberate the male’s actions are. As Madden writes, “By our using the term ‘cultivation’, we are not invoking any intent (although we cannot rule it out).” During his observations, he didn’t find any evidence that the males actively tend to the fruits, or the ground on which they grow. Instead, it’s possible that the males are just chucking out any fruits that shrivel or turn brown, leaving only the healthiest seeds to germinate within the bower’s surroundings. This is a two-way arrangement. The bush tomato grows well in bowerbird arenas, because it faces less competition from other plants. The bird clears leaf litter and other foliage from their courts, and its fastidiousness produces a lot of bare ground – the ideal habitat for a germinating bush tomato seed. So, the relationship between the spotted bowerbird and the bush tomato may be more of a symbiosis. Indeed, Madden thinks that the bird’s antics may be changing the fruit. Bush tomatoes from plants near bowers look different to those from random sites. They are less strongly coloured and they have a slightly greener hue – traits that are especially attractive to the birds. The bird and the plant are evolving together. This is remarkably similar to the way in which humans domesticated plants like rice and wheat. We have artificially selected for traits that are useful to us. For example, wild wheat falls to the ground when it ripens, but its domesticated cousin stays on the stem. That makes for an easier harvest. And while today’s farmers and scientists may breed plants with careful deliberation, the earliest forays into domestication were accidents. Without intent, our ancestors steered the course of plant evolution by eating individuals with the right properties, and sowing their seeds in latrines, paths, and other sites close to human settlements. So it is with the spotted bowerbird and its sexy shrub. Reference: Madden, Dingle, Isden, Sparfeld, Goldizen & Endler. 2012. Male spotted bowerbirds propagate fruit for use in their sexual display. Current Biology http://dx.doi.org/10.1016/j.cub.2012.02.057More on bowerbirds: