Investigating an arachnid’s visual sense leads to an eye-opening discovery. 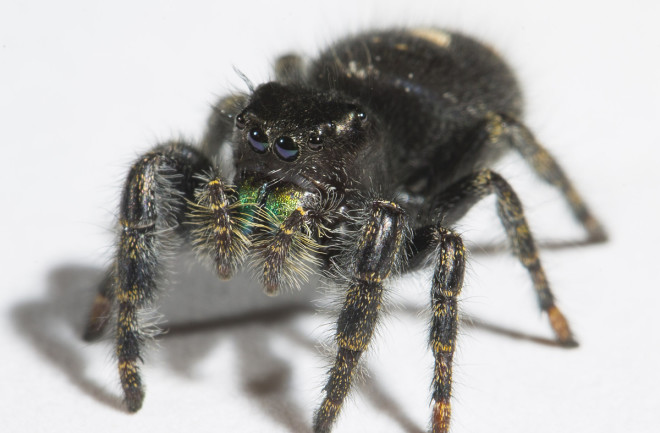 Jumping spiders primarily navigate their world through sight, or so researchers have long thought. As a neuroethologist who studies how the nervous system works, Gil Menda of Cornell University’s Hoy Lab was intrigued by the challenge of figuring out a spider’s complex visual network. So a few years ago, he partnered with Paul Shamble, a spider behaviorist now at Harvard University.

Menda developed a technique that allowed them to insert a probe into an arachnid’s tiny brain and discern activity: When a brain cell fired, the researchers would hear a pop. But one day, a pop sounded off unexpectedly, shocking the researchers and leading them to shift their focus of study from sight to sound.

Turns out jumping spiders’ auditory systems are much better at detecting noise than anyone thought. Not only can they pick up sounds from at least 375 body-lengths away (about 10 feet), but they’re also specially attuned to the frequencies produced by the wing beats of their flying enemies, like the wasp. Menda relives the chance moment that caused him to change course.

Neuroethologist Gil Menda found jumping spiders are much better at picking up sounds than anyone thought. (Credit: Michael Okoniewski)

One day, I was doing visual recording and getting more data on the integration between the eyes in spiders and how the information is being transmitted in the brain. I was searching in the neurons, and I went to the border of the area of the brain where the visual system is. While I was doing that, I didn’t get many responses in that area, but I was moving my chair back, and when I did, I suddenly heard a really strong spike.

So I listened and immediately heard very, very pronounced spikes, which means something was going on. It’s almost like when you fish and you feel a bite — it’s the same feeling. I was just feeling that strong pull when I heard that spike. And when I did that, I asked myself, What’s going on here? I hadn’t done anything to the eyes. So I did it again, and there were more spikes. And then I clapped my hands and more spikes.

I called Paul, who was working in the next room. I said, “Hey Paul, can you come over for a second? Can you clap your hands?” He was standing outside of the lab, and he clapped his hands and prrr, you hear the spike. I said to Paul, “That’s the spider.” I asked him if spiders hear sound, and he said no, it’s mainly vibratory, that they “hear” things that are moving, that they can feel. It was unexpected. And we were really, really surprised. We knew at that moment that we had something really big here.