This spring I blogged about some marvelous videos made by scientists at Brown University in their quest to understand how bats manage to be bats. Turning your hands into membrane-lined wings makes for some awkward trade-offs. Moving around on the ground, for example, gets to be a special challenge. Bats have not simply evolved a single solution to these trade-offs, however. Instead, they've explored lots of different compromises. While many bats can only creep awkwardly on the ground, for example, vampire bats can actually gallop. 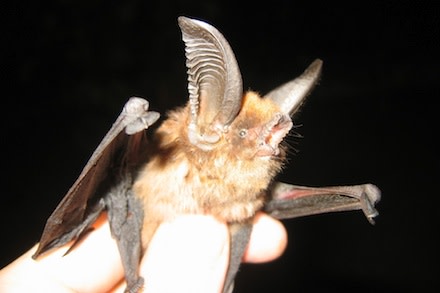 Today one of the Brown scientists, Dan Riskin (who has just set up a lab at City College in New York), published a new study on another extraordinary solution to being a bat. Most bats are well-adapted to roosting by hanging upside-down from long claws. But that is not a universal rule. A few bats have evolved a Spiderman strategy. These bats have pads on their wrists and ankles that they clamp onto surfaces. The sucker-footed bat of Madagascar (Myzopoda aurita), for example, roosts on the inner wall of a rolled-up leaf, its head pointed up instead of the usual down. The Spiderman strategy has evolved many times in animals. Many insects and spiders can cling to walls, as can frogs and gecko lizards. Mammals--not so much. It's true that many mammals have pads on their hands and feet that add friction to their grip. But sucker-footed bats are among the few mammal species that can really stick to vertical surfaces. Last year, Riskin and Paul Racey of the University of Aberdeen went to Madagascar to figure out how sucker-footed bats manage this feat. They filmed the bats climbing sheets of glass and brass. As the bats climbed, the scientists tried to drag and pull them around to measure the forces they generated. They came to a surprising conclusion:

The sucker-footed bats of Madagascar, despite their common name, do not actually suck at all.

Suction works in a distinctive way. If you pull a suction cup away from the surface it's attached to, the cup will strongly resist your efforts. But you can drag the cup along the surface with much less force. When Riskin and Racey tested the bats, they found that the animals could easily be pulled off a surface. Dragging the bats, however, required much more force. In fact, they calculated that a single wrist pad is so strong that it could hold the weight of eight bats. But there's one important caveat to the strength of the bat pads. Riskin and Racey measured strong forces when they pulled down on the bats. But when they pushed the bats upwards on a surface, the pads peeled off right away. These results indicate that a sucker-footed bat sticks to a leaf by gluing its wrists and ankles to it. Riskin and Racey observed that the pads glistened with some kind of fluid. If they tried to dry the pads off, they got wet again before long. It's possible that this fluid serves as the glue. While glue (or, more technically, wet adhesion) may be useful for sticking to surfaces, it poses a challenge of its own: once stuck, a bat needs a way to get unstuck. It appears that sucker-footed bats produce a fluid that's just sticky enough to keep them clamped to the side of a leaf. But they can peel away easily from one end. This technique may explain why sucker-footed bats defy the heads-down rule among roosting bats. If they tried to hold onto a leaf with their heads pointed down, they'd slide off. The sucker-footed bats were not the only bats to evolve the Spiderman strategy. In Central and South America, there are four species of disk-winged bats (Thyroptera) that can also cling to leaves with pads. Riskin studied disk-winged bats in graduate school and demonstrated that they can form a seal with the disks on the leaves. In other words, they really do suck. Combined with his latest results, the lesson is clear: there's more than one way to mimic Spiderman when you're a bat. Reference: Daniel K. Riskin and Paul A. Racey, "How do sucker-footed bats hold on, and why do they roost head-up?" Biological Journal of the Linnean Society, in press.