Spiderman Pales in Comparison to These Awesome Arachnids 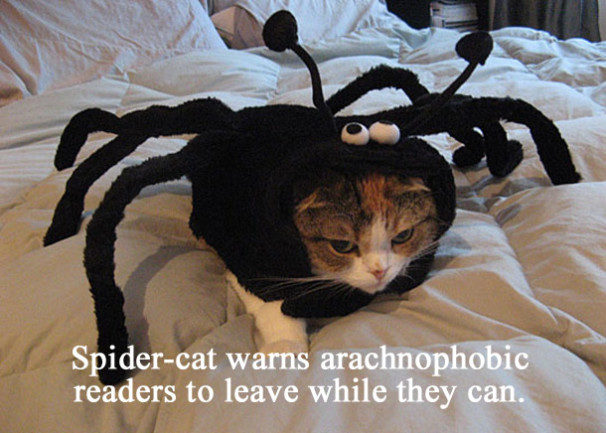 There are around 40,000 species of spiders and they have a range of incredible adaptations to hunt their prey, move about and defend themselves. This gallery explores their behaviour, from vegetarian spiders to venomless ones that crush their prey to social ones that spit venom. Arachnophobes beware. 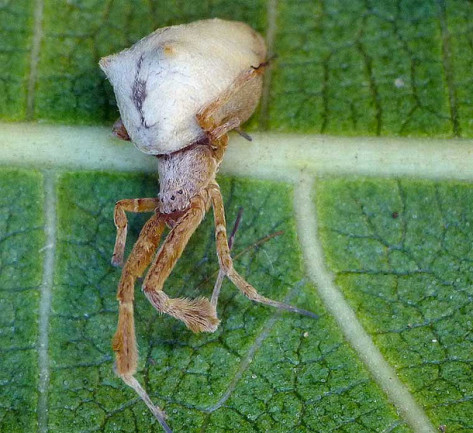 Most spiders kill with venom, but the uloborid spiders (such as Philoponella vicina) have lost their venom glands entirely. Instead, they kill their prey by using their silk as a murderous garbage-compactor. Once an insect lands in a P.vicina web, the spider rushes over and starts wrapping. It uses 10-20 lines of silk at once and cocoons its prey in over 140 metres of the stuff. This silken shroud compresses insects with such force that it breaks their legs, buckles their eyes, and crushes their internal organs. Once the insect is dead, the spider regurgitates digestive juices all over the silk and sucks up the fluids that remain, leaving behind a dry, hollow shell. (Photo by Robert Whyte)

More:The spider that crushes its prey with 140 metres of webbing

Sex is not a pleasant experience for a female Harpactea sadistica. After a brief dance, the male bites her and, with rotating motions, drills a needle-sharp penis into her belly. He ignores her genital opening and ejaculates directly into her body. For good reason, this style of sex (also practiced by bedbugs) is known as traumatic insemination. Normally, the last male that mates with the female would fertilise her eggs – his sperm would flush out those from previous mates. But males of H.sadistica bypass that competition by taking a more direct approach. 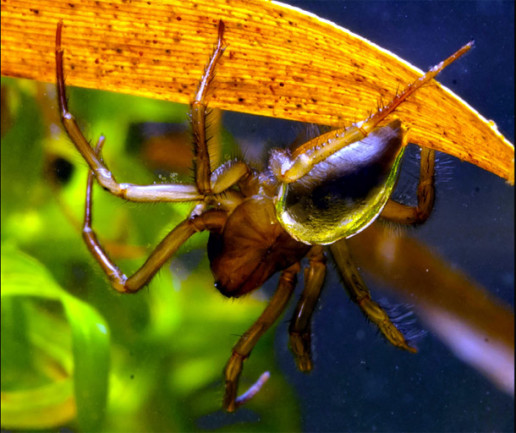 The diving bell spider is the only member of its group to spend its entire life underwater. It carries bubbles from the surface and traps them beneath a dome-shaped web, spun between underwater plants. The bubble acts as a home, a nursery, and even a gill. It automatically replenishes its own oxygen, sucking in the gas from even the most stagnant of water. As a result, the diving bell spider can stay inside for a full day before needing to top up its air supply.

More: The diving bell and the spider 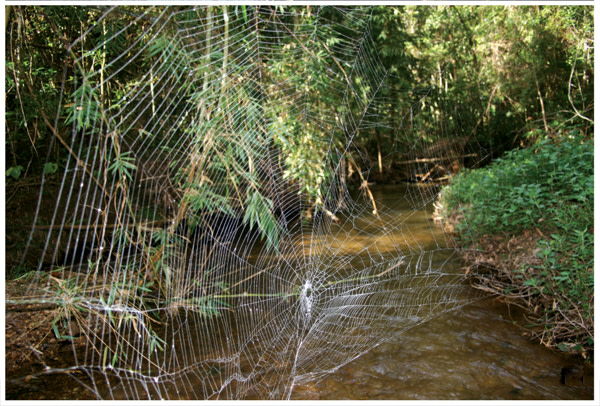 The largest web in the world belongs to Darwin’s bark spider from Madagascar. It weaves its gargantuan trap over entire rivers and lakes. The main thread can be as long as 25 metres and the sticky core can be as large as 2.8 square metres. Darwin’s bark spider also uses the toughest silk of any species. It’s twice as elastic as any other spider silk and it can resist 10 times more force than Kevlar before rupturing. It’s not just the apex of spider silk – it’s the toughest biological material ever found.

More: A spider web that spans rivers made from the world’s toughest biological material 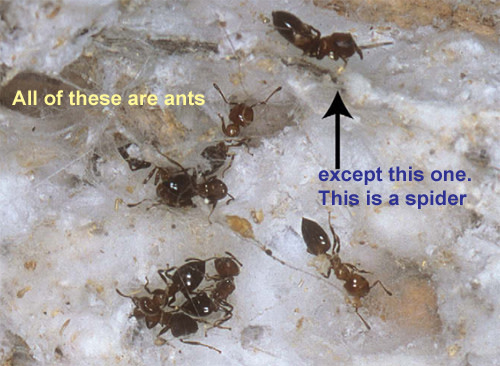 The dark-footed ant-spider Myrmarachne melanotarsa is a liar. It’s a jumping spider that impersonates ants. It certainly looks the part, but it boosts the illusion with a social streak. To mimic the large societies of ants, the ant-spider travels in groups and lives in silken apartment complexes, with hundreds of individuals staying in nests connected by silk. This act protects the ant-spider from larger spiders that might eat it. It also allows the ant-spider to raid the nests of those same larger spiders. The would-be predators run away and abandon their eggs and youngsters to the charlatans. The ant-spider is a spider that looks like an ant to avoid being eaten by spiders so that it itself can eat spiders.

More: Spiders gather in groups to impersonate ants and Spider mimics ant to eat spiders and avoid being eaten by spiders 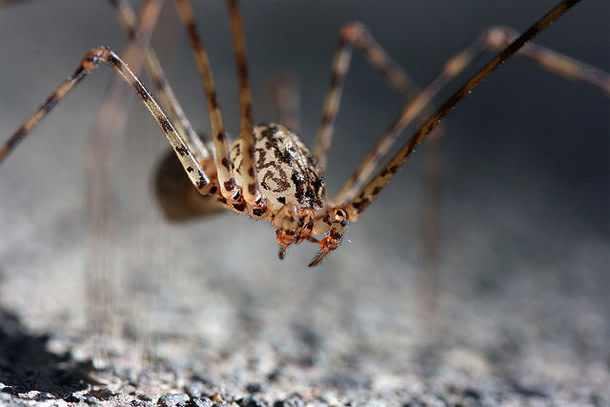 While most spiders need to bite their prey to inject venom, Scytodes spiders can spit a sticky, venomous fluid that both traps its victims and poisons them – that’s why they’re called spitting spiders. Worse still, they do this in packs. After hatching, the spiderlings spend their early lives on their home web and they spit at, bite and devour prey en masse. As they grow up, their cooperative streak fades and they start turning on each other, cannibalising each other if they get the chance. (Photo by Alejandro Soffia Vega) 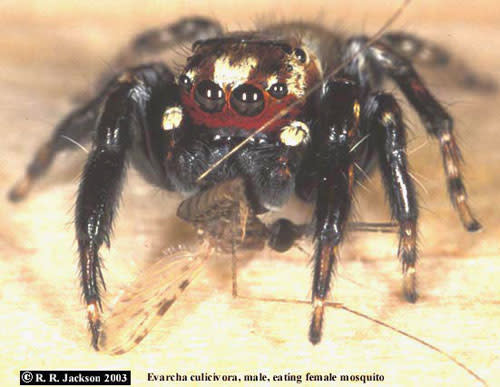 In Kenya, there lives a spider that drinks human blood. But fear not – Evarcha culicivora is an indirect vampire. It’s after mosquitoes that have fed on mammal blood. Evarcha specifically targets malarial mosquitoes that have just fed on blood, and it can tell them apart from other similar insects using its keen senses of vision and smell. Evarcha also sniffs its way to places where mosquitoes are likely to gather and it’s bizarrely drawn to the smell of human feet. Once it feeds, the blood doesn’t just nourish the spider – it’s also an aphrodisiac. After feeding on mosquitoes, Evarcha smells sexier.

Bagheera kiplingi is the only vegetarian spider out of around 40,000 species. It exploits a partnership between ants and acacia trees. The ants defend the trees, which repays with hollow thorns for shelter, and nutritious nodules for food. These are called “Beltian bodies” and B.kiplingi has learned to steal them, using stealth, powerful jumping legs and silken safety lines to avoid being attacked. The Beltian bodies make up the majority of its diet, but no one knows how B.kiplingi copes with them. They’re high in fibre and spiders cannot chew their food; they only “drink” prey that has already been liquefied by their venom. 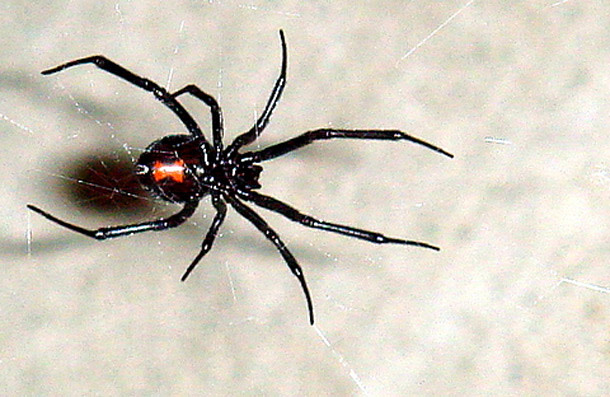 The notorious black widow spins two very different sorts of webs. The basic design consists of a horizontal sheet with vertical lines underneath, stuck to the floor with blobs of glue. These threads are incredibly taut. If an insect blunders into them, they break, stick to the insect and catapult it into mid-air, where the spider can kill it leisurely. This structure is only woven by hungry spiders. Well-fed ones spin a more chaotic tangle of non-stick threads. It’s a completely different design and akin to a silken fortress, providing the spider with better defences when it has already ensnared its fill of food. The black widows might even change the architecture of their lairs to stop themselves from overeating. 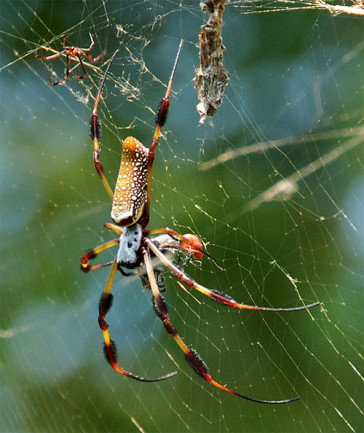 In the forests of South Africa lurks the world’s largest web-spinning spider, Nephila kowaci. It’s a giant among a family of giants. The male is no bigger than a large house spider but the female has a body that’s 3-4 centimetres long and legs that are each 7.5cm long. It was first discovered in 1978, but it took 25 years and several failed expeditions to find another, lying unsuspectingly in an Austrian museum. Three more were found shortly after in the wild.