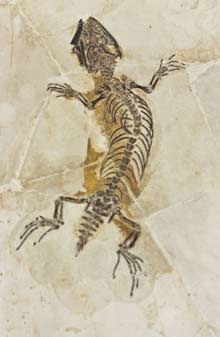 It's no secret that an alarming number of species around the world, especially vertebrates, are in trouble. But is the notion that the Earth is on the brink of a sixth major extinction event—the first since the dinosaur die-off—true, or alarmist? In Nature this week, a team of scientists sought to answer the question directly by counting as many species (and extinctions) as they could in the fossil record and the recent historical record. The result is gloomy news: There's still a chance to avert much of the crisis, but if nothing changes, such a mass extinction event really could happen in the span of just a few centuries.

Mass extinctions include events in which 75 percent of the species on Earth disappear within a geologically short time period, usually on the order of a few hundred thousand to a couple million years. It's happened only five times before in the past 540 million years of multicellular life on Earth. (The last great extinction occurred 65 million years ago, when the dinosaurs were wiped out.) At current rates of extinction, the study found, Earth will enter its sixth mass extinction within the next 300 to 2,000 years. [MSNBC]

That range of time the researchers give is so large because of the great diversity of life—it makes it hard to track exactly how many species are disappearing, and how quickly. (Indeed, DISCOVER has covered how biologists are discovering many new species these days just as those species face extinction

). So Anthony Barnosky and his team made conservative estimates based on the available evidence. For instance, they pegged the rate of mammal extinction at 80 species out of a total of 5,000-plus in the last five centuries. That may not sound like much, but when you consider the speed at which things typically happen on a geologic scale, it is a faster rate of species loss than the previous five mass extinctions

The picture gets even grimmer when all mammals currently endangered or threatened are added to the count. If those all disappear within a century, then by 334 years from now, 75% of all mammal species will be gone, says Barnosky. "Look outside of your window. Imagine taking away three-quarters of the living things you see and ask yourself if you want to live in that world." [ScienceNOW]

If that many species disappeared, he says, it would take millions of years for biodiversity

to recover. But it doesn't have to be that way.

"So far, only one to two percent of all species have gone gone extinct in the groups we can look at clearly, so by those numbers, it looks like we are not far down the road to extinction. We still have a lot of Earth’s biota to save," Barnosky said. [Vancouver Sun]

Related Content: 80beats: Were Coal Explosions to Blame for the Planet’s Biggest Die-Off?

80beats: In the Permian Period, Erupting Super-Volcanoes May Have Killed Half the Planet