Sparrows sound sexier in the cold 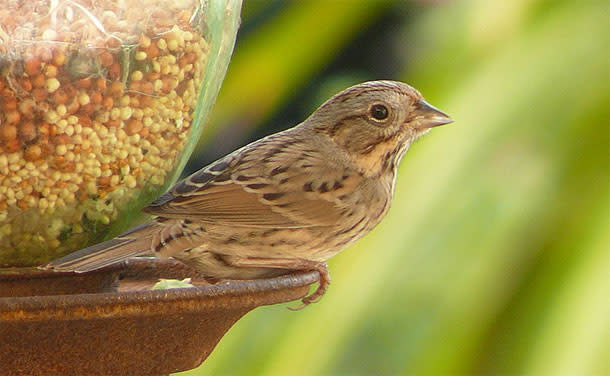 As first light tickles the air, songbirds croon to proclaim their territories and woo potential mates. There are many possible explanations for the timing of the beautiful dawn chorus, including the fact that sound travels further during the early hours of the day. But Michael Beaulieu and Keith Sockman from the University of North Carolina have found another for the list. It’s based on a very simple observation: dawn is often very cold. And female Lincoln’s sparrows find songs sexier if they hear them in the cold. Lincoln’s sparrows are small, drab birds found throughout Canada and parts of the United States. They are seldom seen, but more often heard because of their high-pitched trill. In the summer of 2011, Beaulieu and Sockman recorded the birds in a Colorado field, and found that they start singing at 5 am. Their chorus reaches its crescendo at 5.30 and largely disappears by 6.00. This narrow window of time corresponds to the coldest part of the day, when average temperatures fall below 7 degrees Celsius. Back in the lab, Beaulieu and Sockman played recordings of male songs to captive female sparrows at a temperature of 1C, and a different set of songs at 16C. The females preferred the “colder” song. In the frostier setting, they spent around 7.5 minutes cuddled up to the speaker, compared to just 5 minutes in the warmer temperature. When the sparrows heard the songs again a few days later (and all at a balmy 16C), they preferred the songs that they had initially heard in the cold. Cold conditions are challenging for little birds. For example, in 2005, Kelly Ward and Peter Slater found that willow warblers, which sing during nippy conditions atop windy reeds, spend between 42 and 63 per cent more energy while they sing just on keeping themselves warm, let alone on actually producing notes. Beaulieu and Sockman suggest that a male who can brave the chill and still belt out a seductive ballad reveals himself to be a good catch. They also acknowledge that there are other possible explanations, and that their findings are “unlikely to suggest a basis for the dawn chorus broadly”. It could be that the temperature affects the physical quality of the songs, or the mental abilities of the females. To demonstrate that there’s an adaptive benefit to picking songs heard in the cold, the duo would actually have to link a male’s performance during chillier conditions with his quality as a mate, and the number of young that a female can raise by acquiring his sperm. Scientists need tall ladders of evidence to show that a trait is adaptive, and this study provides just the first rung. Reference: Beaulieu & Sockman. 2012. Song in the cold is ‘hot’: memory of and preference for songs perceived under thermal challenge. Biology Letters http://dx.doi.org/10.1098/rsbl.2012.0481Image by Linda Tanner