For many animals, living with others has obvious benefits. Social animals can hunt in packs, gain safety in numbers or even learn from each other. In some cases, they can even solve problems more quickly as a group than as individuals. That's even true for the humble house sparrow - Andras Liker and Veronika Bokony from the University of Pannonia, Hungary, found that groups of 6 sparrows are much faster at opening a tricky bird feeder than pairs of birds. 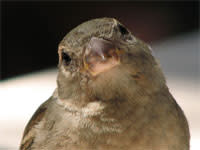 After ruling out several possible explanations, the duo put the speedy work of the bigger flock down to their greater odds of including boffin birds. Individual sparrows vary greatly in terms of their skills, experiences and personalities. Larger groups are more likely to include the sharpest bird brains, or several diverse individuals whose abilities complement each other.

Wild animals constantly encounter new, unfamiliar and challenging situations and the ability to adapt to them more quickly may give social species an edge over loners. The problem-solving advantages of groups have been demonstrated in humans. Three people, far from being a crowd, solve intellectual tasks faster than pairs or individuals, even if they were the smartest of the sample. There has been much less research on other animals, although scientists have certainly found that large groups of birds or fishes find food faster and more efficiently than smaller groups.

But Liker and Bokony's sparrow experiments are the first to show that large animal groups outperform smaller ones at problem-solving tasks where they have to invent new techniques. House sparrows are a good choice for a study like this. They are very social birds that live in flocks of anywhere from a few individuals to a few hundred. They are opportunists that use their relatively large brains to find food in all sorts of new environments.

The duo captured 56 wild sparrows and placed in groups of two or six. The birds were fed on seeds kept in a clear plastic box with 16 holes drilled through the top. Each hole had a transparent lid with a small, black knob on it. For the first six days, the lid was held open with sticky tack and on the seventh, it was tacked shut. To get at the food, the sparrows had to either peck at the lid vigorously to detach it, or to pull it open. Liker and Bokony watched them have a go, and carefully noted down how they behaved during their attempts. 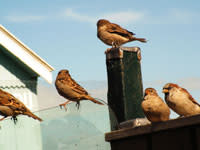 The task may seem simple, but overall less than half of the sparrows solved it. However, the large groups completely outclassed their smaller rivals in every way - they opened four times more lids in total, they opened the first lid 11 times sooner and on average, the birds got their first seeds 7 times sooner. Up to 81% of the variation in the individual sparrows' success was down to the size of the group they were in.

It's possible that communal sparrows are more motivated to solve the task because they face more competition, feel safer from predators, or are simply less scared of new things. But that wasn't the case here. All the sparrows approached the feeders just as readily and spent the same amount of time scanning for predators, no matter how big their group. And before the point when they opened their first lid, they tired equally hard to do so.

It's also possible that large groups may have aced the task just because their members make more attempts to solve the problem. That probably explains a small part of the sparrows' success, but the efficiency of the large groups was out of all proportion to their size. If the birds were simply working independently, then three times as many birds should make three times as many attempts to open the feeder. That was true. But they should also hit on three times as many solutions, which is a woeful underestimate - in reality, they were much more efficient than that.

Once the first bird succeeded at the task, the others may have been more motivated to try their own luck. They may even have picked up techniques from each other. Again, this could explain why larger groups spent more time at the feeder and opened more lids, but not why they were 11 times quicker at opening their very first one.

Having ruled out these options, Liker and Bokony favour the idea that large groups succeed because they're more likely to contain a diverse range of individuals, some of whom will be very good at problem-solving. Each of their large groups, for example, included 2 or 3 sparrows who were very quick at opening lids but the small groups contained just one at the very best. As the duo write:

"For species such as sparrows that live in habitats being continuously changed by humans, two heads and definitely better than one."

As a aside, Liker and Bokony also found that city birds were more capable than their country cousins. In the past, scientists have suggested that problem-solving abilities are particularly important for surviving the urban jungle. This is clearly something that needs to be studied in greater detail - are urban animals more intelligent or flexible than rural peers of the same species? (As an urbanite myself, I'd love to think so!)