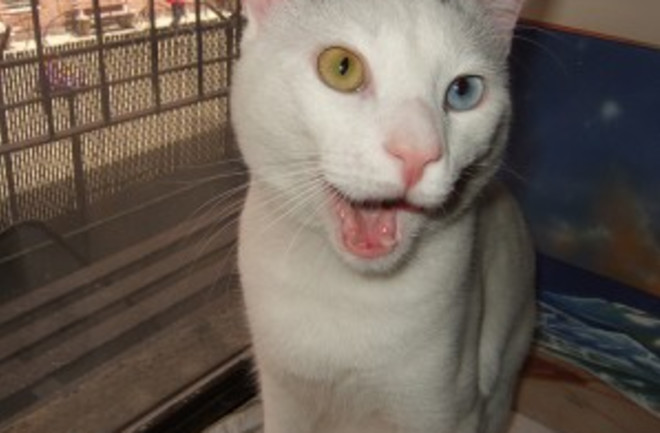 Photo: flickr/Rob DiCaterinoAre you one of those people who swears they can understand what their cat is "saying" when it meows? If so, you should pay attention to this paper, because it may tell you something about yourself. These scientists decided to try to verify whether people really can tell what cats are saying by recording cat meows in different contexts, such as food-related (being fed) or distress (in a car). They then played the calls back to people and had them classify what they thought the cat was talking about. The results? People are generally pretty crappy at telling what cats are meowing about (although cat owners do a bit better), and seem to actually use context rather than the cat calls themselves to determine what's bothering their furry friends.Classification of domestic cat (Felis catus) vocalizations by naive and experienced human listeners. "To test for possible functional referentiality in a common domestic cat (Felis catus) vocalization, the authors conducted 2 experiments to examine whether human participants could classify meow sounds recorded from 12 different cats in 5 behavioral contexts. In Experiment 1, participants heard singlecalls, whereas in Experiment 2, bouts of calls were presented. In both cases, classification accuracy was significantly above chance, but modestly so. Accuracy for bouts exceeded that for single calls. Overall, participants performed better in classifying individual calls if they had lived with, interacted with, and had a general affinity for cats. These results provide little evidence of referentiality suggesting instead that meows are nonspecific, somewhat negatively toned stimuli that attract attention from humans. With experience, human listeners can become more proficient at inferring positive-affect states from cat meows."