Some Shark Scales Could Begin to Erode as Oceans Acidify

Tiny scales, called denticles, could snap and wear away faster in oceans made more acidic by climate change. 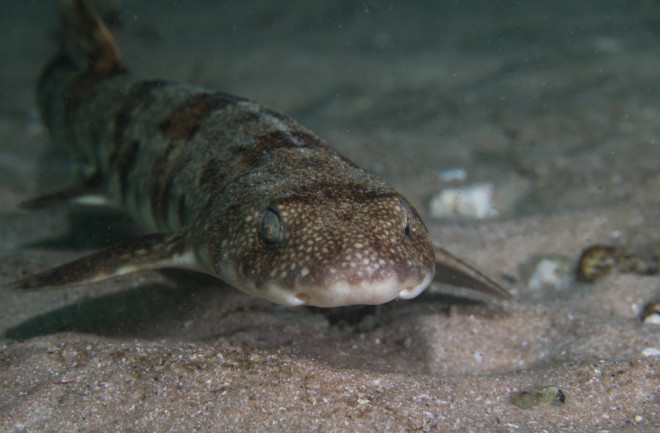 Like soda on teeth, rising ocean acidity might erode the calcium-heavy scales covering shark bodies. Called denticles, these miniature toothlike projections on shark skin help the fish swim — and could start to break or wear down if ocean acidity reaches the levels that the Intergovernmental Panel on Climate Change predicts by 2300.

The study investigating this scenario, published in Scientific Reports, looked specifically at puffadder shysharks, which can only live in temperate waters around South Africa. Though not all denticles and habitats are identical, it’s possible that the results could apply to other species, writes study co-author Lutz Auerswald, an animal scientist with Stellenbosch University in South Africa, via email.

As atmospheric carbon dioxide levels rise, some of that CO2 will dissolve in the ocean and make it more acidic. For species accustomed to current, narrow acidity levels, that could be a problem. “We are a hotspot of abundance and species-richness of cartilaginous fish here,” says Auerswald about the waters surrounding South Africa. Many of the species, including puffadder shysharks, can’t live anywhere else. For the shark, water outside their range is too warm or too acidic, Auerswald says.

This particular stretch of ocean is also hit with bouts of acidity, thanks to deep undersea currents pushing up cold water. Because puffadder shysharks are native to this habitat, the researchers wanted to see how they handle acidity levels similar to what climate change might induce by 2300. It gave the researchers an idea of how the sharks might respond when they can find no reprieve from acidic waters.

“The corrosion of the denticles ... came as a surprise,” Auerswald says. High-powered imaging revealed that, in the sharks swimming in acidic water for nine weeks, about 25 percent of their denticles were broken, eroding or otherwise damaged. That's compared with only 9 percent in the sharks kept in normal water.

In the lab, the damage to the sharks’ scales didn’t change their swimming or other behavior, Auerswald says. But in the wild, denticles decrease drag and make sharks more efficient swimmers and hunters, and can even act as armor during an attack. As their name suggests, denticles are similar to teeth, which leads Auerswald and his colleagues to believe that ocean acidification can wear down shark teeth, too. It’s something they plan to study more in further research.

There was some good news, as well. High CO2 levels in the water could make the sharks’ blood acidic. But after two groups of shysharks swam in acidic water for 32 hours or nine weeks, both had responded by incorporating enough of a counteractive molecule called bicarbonate into their bloodstream that their acid levels were fairly normal.

If we were to stop releasing CO2, the already-acidifying ocean could slowly return to normal, Auerswald says. But even though ocean acidity has yet to hit levels it could in 2300, that doesn’t mean these sharks, and their denticles, are unscathed. “It is possible that the denticles we see are already affected,” Auerswald says.