Solar power is a relatively new development for humans but, of course, many living things have been exploiting the power of the sun for millions of years, through the process of photosynthesis. This ability is usually limited to plants, algae and bacteria, but one unique animal can do it too - the emerald green sea slug Elysia chlorotica. This remarkable creature steals the genes and photosynthetic factories of a type of algae that it eats (Vaucheria littorea), so that it can independently draw energy from the sun. Through genetic thievery, it has become a solar-powered animal and a beautifully green one at that. 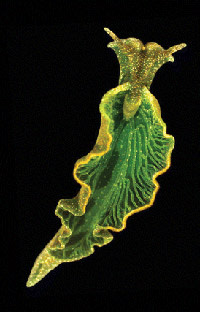 The cells of algae, like those of plants, contain small compartments called chloroplasts that are its engines of photosynthesis. As the Elysia munches on algae, it takes their chloroplasts into the cells of its own digestive system, where they provide it with energy and sugars. It's a nifty trick that provides the sea slug with an extra energy source, but the problem is that it shouldn't work.

Chloroplasts are not independent modules that can be easily separated from their host cell and implanted into another. They are the remnants of once-independent bacteria that formed such a strong alliance with the cells of ancient plants and algae, that they eventually lost their autonomy and became an integral part of their partner. In doing so, they transferred the majority of their own genes to their host so that today, chloroplasts only have a tiny and depleted genome of their own, containing just 10% of the genes it needs for a free-living existence.

So, shoving a chloroplast from an algal cell into an animal one should be about as effective as installing a piece of specialised Mac software on a PC. The two simply shouldn't be compatible, and yet

and its chloroplasts clearly are. Mary Rumpho from the University of Maine discovered the key to the partnership - the sea slug has also stolen vital genes from the algae that allows it to use the borrowed chloroplast. It has found a way to patch its own genome to make it photosynthesis-compatible.

The pilfered gene is called psbO and it codes for a protein called MSP (manganese-stabilizing protein, in full). MSP is so important to the chemical reactions of photosynthesis that it is found in all species that have this ability, with very few differences between the various versions.

The pbsO gene has never before been spotted in an animal genome, but Rumpho found it amidst the sea slug's genes. To make sure that she wasn't just detecting undigested algae that had been left over in the slug's body, Rumpho also searched for pbsO in the DNA of sea slug eggs that had never been previously exposed to algae. She found it there too - clearly, the gene had been fully assimilated into the slug's own genome. 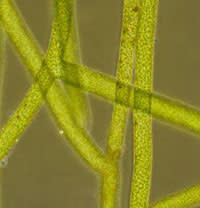 There is no doubt as to its origin - it must have come from the algae for both the slug's pbsO gene, and the MSP protein it codes for, were exact matches for the versions carried by V.littorea. Rumpho also found that other genes involved in photosynthesis have been transferred from the algae to the slug. This is a vital point for without these genes, the stolen chloroplasts wouldn't work. The slug itself is providing the proteins that make photosynthesis possible.

Elysia's antics are that much more intriguing because gene-swapping of this sort is very rare outside the bacterial world. Bacteria trade genes like humans swap gossip and on rare occasions, they will transfer genes (or even their entire genomes) into the more complex cells of animals and plants. And there are even fewerexamplesof genetic trade between these 'higher' kingdoms, which makes the tale of the slug and the algae all the more extraordinary.

We can only speculate about the route that led to Elysia wielding algal genes, but Rumpho has an idea. She suggests that once upon a time, swallowed algae ruptured in the gut of a sea slug, setting free its DNA, which was then taken up by the cells of the animal's digestive system. Somehow, this absorbed DNA was incorporated into Elysia's own genome.

In an email exchange with Carl Zimmer, Rumpho notes that Elysia's digestive system branches very closely to its sexual organs, giving the absorbed DNA a route into the animal's sex cells, and from there, into the next generation. She also notes that the sea slugs are almost always infected with a virus, which could act as a vehicle that shuttles DNA from destroyed algae into slug cells.

The story of Elysia and its genetic kleptomania is yet another example of animals undergoing the sort of horizontal gene transfer that is so commonplace in bacteria (see my previous posts on Space Invaders and rotifers). With similar reports growing in number, we would be foolish to underestimate the importance of such transfers in animal evolution.