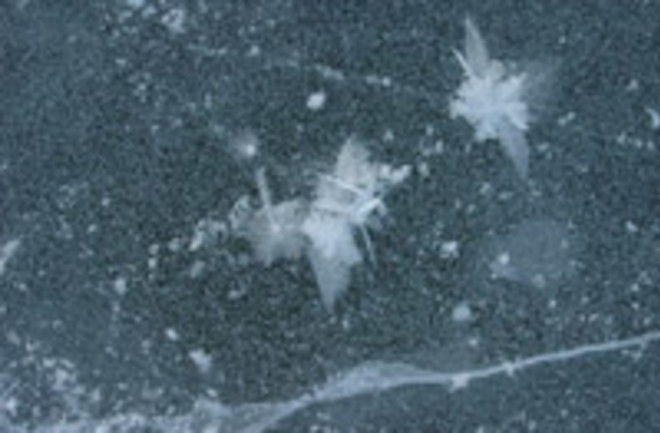 The next time you watch a snowfall, just think that among the falling flakes are some that house bacteria at their core. It's a well known fact that water freezes at 0&#176C, but it only does so without assistance at -40&#176C or colder. At higher temperatures, it needs help and relies on microscopic particles to provide a core around which water molecules can clump and crystallise. These particles act as seeds for condensation and they are rather dramatically known as "ice nucleators". Dust and soot are reasonable ice nucleators but they are completely surpassed by bacteria, which can kick-start the freezing process at higher temperatures of around -2&#176C.

rely on a unique protein that studs their surfaces. Appropriately known as ice-nucleating protein, its structure mimics the surface of an ice crystal. This structure acts as a template that forces neighbouring water molecules into a pattern which matches that of an ice lattice. By shepherding the molecules into place, the protein greatly lowers the amount of energy needed for ice crystals to start growing. This ability of bacteria to seed the growth of ice crystals has been known for some 40 years. But for the first time, a new paper by Brent Christner from Louisiana State University has shown just how widespread these living ice-makers are. Christner collected large samples from 19 fresh snowfalls in regions as diverse as Montana, France, and Antarctica, and isolated the ice nucleators by filtering the melted snow. Surprisingly, he found traces of cells containing DNA among the nucleators in every single site. Both heat, which deforms the ice-nucleating protein, and lysozyme, an enzyme that wrecks a bacterium's outer wall, robbed the vast majority of these particles of their ability to form ice. Clearly, our atmosphere is rife with ice-forming microbes. They may even have an important role in the genesis of clouds, especially at relatively warm conditions above -7&#176C, when ice doesn't form spontaneously. Most of the bacterial ice nucleators infect plants and Christner thinks that they may have been swept away from the surface of infected hosts by gusts of wind. Once airborne, the bacteria can be transported across remarkable distances. Antarctica, certainly, isn't exactly known for its greenery and the bacteria that Christner found in snowfall from this region must have travelled from other continents. Over time, the floating bacteria become surrounded by ever-expanding ice crystals and eventually fall to the ground as snow or rain. On the way, they could potentially hit new plants to infect. In this way, you could almost think of the atmosphere as a giant conveyor belt that provides bacteria with a free lift from one plant to another. It's just another stage in the infection cycle and bacteria could be using clouds for transport, just like malaria parasites use mosquitoes to jump between hosts. The ice-nucleating protein may well have evolved for this very purpose. By encouraging the growth of ice crystals, it increases the chances that a bacterium will fall back to earth, in the direction of new hosts. Snow image by Paul JerryReference: Christner, B.C., Morris, C.E., Foreman, C.M., Cai, R., Sands, D.C. (2008). Ubiquity of Biological Ice Nucleators in Snowfall. Science, 319(5867), 1214-1214. DOI: 10.1126/science.1149757 Edit: Tara at Aetiology and Mike at Discount Thoughts have also written about this study.