Snails get sexy when parasites are around

In Lake Alexandrina, New Zealand, a population of snails is under threat from a parasitic flatworm, a fluke aptly known as Microphallus. The fluke chemically castrates its snail host and uses its body as a living incubator for its larvae. But the snails have a weapon against these body-snatching foes - sex. 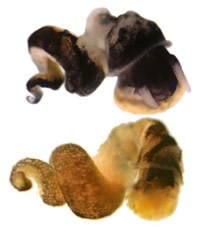 The New Zealand mud snailPotamopyrgus antipodarum is found throughout island's freshwater habitats. They breed either sexually or asexually through cloning, and the two strategies vary in prevalence throughout the lake. In the shallower waters round its margins, sex is the name of the game, but in the deeper waters towards the lake's centre, snails are more likely to opt for cloning.

Kayla King from Indiana University has shown that it's the concentration of the local parasites that drives this gradient of sex. The flukes spend their adult lives in ducks and they rely on the birds inadvertently scooping up their larvae while feeding. In Lake Alexandrina, ducks only feed in the shallow waters around the lake's margins so these areas are hotspots for parasites, and for co-evolutionary wars between them and their snail hosts. Sex provides the snails with the genetic ammunition they need to stay in the game.

The snails and their parasites beautifully support and illustrate the principles of the Red Queen hypothesis, which suggests that one of the chief benefits of sex lies in providing the genetic innovation necessary to outfox parasites in evolutionary arms races.

Asexual animals have massive advantages over sexual ones - they can produce more offspring quickly and they never have to dilute their own genetic contributions with those of a partner. All in all, they should rapidly replace sexual counterparts unless something negates their advantages - something like competition against parasites. To a parasite, a population of asexual clones with their identical genomes, are an easy target. Any adaptation that gives them the upper hand against one individual will work against the whole group.

Sexual individuals, on the other hand, have genetically diverse offspring, for every time a male and female mate, their genes mingle in new and interesting combinations. That makes them far more difficult to game when the targets are constantly shifting.

King collected snails from the shallow and deep parts of Lake Alexandrina and nearby Lake Kaniere. She also captured Microphallus flukes from these two lakes and one other, and pitted them against the various snails. The results showed that the parasites are strongly adapted to their local sub-populations of snails. For example, the Alexandria flukes are much more infectious to the shallow-water sexual snails from the same lake than they than the deep-water asexual ones. The shallows are indeed co-evolutionary hotspots.

The parasites were only good at infecting snails from the same local area - the shallow part of their own particular lake. Snails were foreign to them if they came from either different lakes, or from the deeper parts of the same one (even if those regions were only a few metres away). This rules out the possibility that the sexual behaviour of the shallow-water snails makes them more vulnerable to parasites. The opposite explanation, that more parasites lead to more sex, is the likelier one.