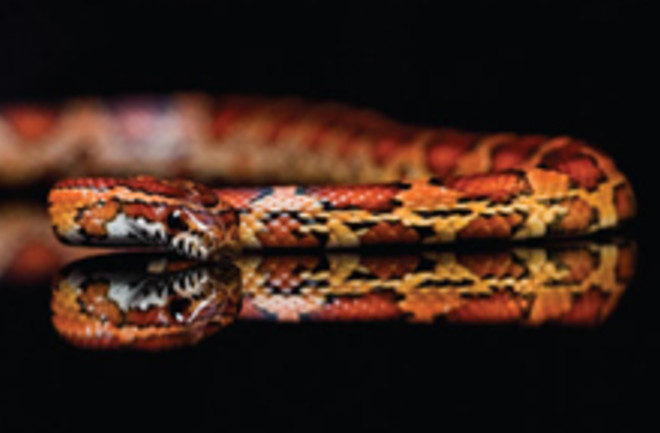 Snakes certainly make it look easy when they slither forward, leaving perfect S-curve tracks behind them, but scientists have long been puzzled by the mechanics of their locomotion. One theory proposed that they propelled themselves by pushing off small twigs and rocks in their paths, but researchers noted that they move equally well across smooth surfaces, like flat rock or desert sand. One researcher who is studying snakes' motions, David Hu, notes that snakes

are champs at escaping across office carpet.... "One snake escaped, and we didn't know where it was until we got a printer jam," he says. (The snake was fine.) [ScienceNOW Daily News].

Now, after a series of experiments and some computer modeling, Hu says his team has cracked the case.

A snake’s scales, Dr. Hu said, resemble overlapping Venetian blinds, and tend to catch on tiny variations in the surface they lie on. This friction is greater in the forward direction than in sideways directions, as it is with wheels and ice skates. This frictional difference results in the snake’s moving forward as it undulates [The New York Times].

For the study, published in the Proceedings of the National Academies of Science, researchers

They next took awake milk snakes and placed them on extremely smooth surfaces, like slick plastic, and found that although the snakes wriggled and squirmed, they couldn't move forward. Wrapping the snakes in cloth had the same effect; in both cases, the friction was the same in all directions, which prevented the snakes from getting their forward boost. (See videos of these experiments.) But the researchers' mathematical models of how much momentum this friction should produce suggested that they hadn't fully accounted for the snakes' forward motion.

Then the researchers noticed that the snakes were lifting parts of their bodies as they slithered forward on the recorded videos. Hu described it as "dynamic weight distribution" that allowed snakes to concentrate their weight on a few points and move more quickly.... "It will change the speed of snake a great deal" [LiveScience],

says Hu. So the simple, sinuous motion of a slithering snake appears to be a complex combination of factors, as it both pushes off the surface in a few specific spots and grips the ground with friction.

This fits with the notion that snakes have a “remarkable capacity to manipulate their belly scales,” says Bruce C. Jayne, [who wasn't involved in the current research]. Many snakes have specialized muscles that go from scale to scale or from scales to the ribs. These muscles may change the orientation of the scales just a bit, Jayne says [Science News].

Related Content: The Loom: How to Be a Snake has more on this study, including video from the experiments 80beats: Super-Sized Snake Ate Crocodiles for Breakfast 80beats: World’s Smallest Snake May Be the Smallest That Could Ever Exist 80beats: The Father of All Fangs—Snake Weapons Came From One Ancestor DISCOVER: How the Snake Lost Its Legs Image: Grace Pryor and David Hu, New York University