Slackers and parasites can sometimes make the best partners 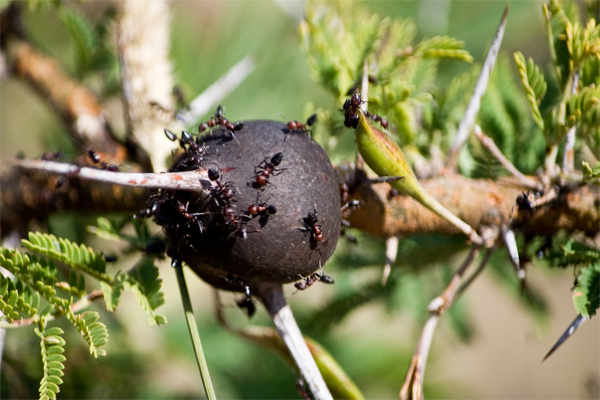 As teenagers, we probably associate with different people to those whose company we keep as adults. At one point in our lives, we may want subversive influences, while preferring support and stability at other times. The same is true for other partnerships in nature. Take the whistling-thorn acacia. This African tree forms partnerships with four different species of ants. Some provide a valuable service as bodyguards (even routing elephants), while others have been written off as freeloaders and parasites. But Todd Palmer has found that these labels are too simplistic. In fact, none of the ants is a perfect partner. The tree actually does best by switching its alliances throughout the course of its life. At certain times, partnering with a parasite is actually its best course of action. Palmer’s study casts the evolution of cooperation in a new light. Mutually beneficial relationships are common in the natural world but all of them are beset by cheats, who reap all the benefits of an alliance while contributing nothing in return. Nonetheless, cooperation persists and there are many reasons for this. In some cases, the incentive to cheat is low because individuals get many benefits from working together – a worker ant, for example, can increase its own success by helping out its genetically related nest-mates. Sometimes, cheats are actively punished; cleaner fish who eat the flesh of their clients while ignoring their parasites are attacked by other cleaners, because their antics threaten to drive away good business. But Palmer’s study suggests another alternative: sometimes “cheats” can actually be a good thing. Palmer has been studying the whistling thorn acacia for several years but it’s likely that his subjects will outlive him. These trees can live for more than a century. Throughout that time, they act as homes for ants, providing them with lodging in the form of swollen thorns, and food in the form of nectar. The tree has four potential tenants that all compete with one another for sole occupancy. Crematogaster mimosae is the most cooperative partner. It aggressively protecting the tree against plant-eating animals and drinks a lot of nectar in return. A second species, Tetraponera penzigi, consumes less nectar, while putting less effort towards defence. The other two ants are less benign, and they could even be viewed as parasites. Crematogaster sjostedti ignores the tree’s thorny accommodation and is negligent about its bodyguard duties. It actually harms the tree by encouraging long-horned beetles to bore into its trunk; this creates the tunnels that the ants like to live in. Finally,

is as valiant a defender as C.mimosae but it also prunes any shoots that the tree sends out, isolating it from the rest of the forest and sterilising it. Palmer kept an eye on these partnerships in 1,750 acacias over 8 years and used mathematical models to work out their pros and cons. He found that none of the ants is a perfect partner. As the trees age, they swap tenants in a predictable way. Younger trees play host to T.penzigi andC.nigriceps, while older specimens are home to C.mimosae and C.sjostedti. By the time a tree is 54 years old, there’s a 90% chance that it has sampled three partners and a 50% chance that it has worked with all four. This seemingly fickle exchange of tenants actually works in the tree’s favour. Palmer found that the most successful individuals were those who tried out all four species, including the alleged steriliser (C.nigriceps) and slacker (C.sjostedti). These ant-swapping trees produce more descendants than those that stick with a single species, even if that single tenant was C.mimosae, supposedly the ideal partner. The tree has different needs at different points of its life. When its young, it doesn’t care very much about being sterilised by C.nigriceps. Instead, it benefits from the fact that this species is very reliable, has small colonies, and unlikely to abandon the host from year-to-year. And besides, at that age, the acacia is too small to attract species like C.mimosae, whose large colonies often span across several trees. As long as these other species can displace C.nigriceps at later parts of the tree’s life (which they can), then the early presence of a sterilising species is no bad thing. Meanwhile, C.sjostedti (the ‘parasite’) tends to colonise the acacia in the later parts of its life, and it does indeed jeopardise the tree’s health. But it’s also less of a drain, because it needs neither swollen thorns nor gifts of nectar. Without having to provide these luxuries, the tree can concentrate on reproducing and indeed, trees that are home to C.sjostedti produce more fruit than those that harbour other species. It might suffer at the tunnels of beetles, but it also gets more chance to spread its seeds. Palmer found other surprises. C.mimosae – supposedly the best possible partner – turns out to be a mixed blessing. Sure, it defends the tree fiercely but it requires a lot of payment, and it has a habit of abandoning the tree after a while. Meanwhile, T.penzigi – the most innocuous of the four species – turns out to be the most beneficial one. It only puts a moderate effort into defence but it’s a keeper, which stays with the tree for many years. It also drinks less nectar, which frees up energy that the tree can divert towards fruit. The relationships between the acacia and its ants have been studied for years, but this is the closest that we’ve come to understanding how they really work. Timing is everything; you can’t just take a snapshot of the different partnerships and add them all up to work out what is “best” for the tree. Palmer also cautions against jumping to conclusions about what’s a friend and what’s a parasite. In this case, even seemingly obvious parasites proved to be beneficial. The entire field of evolutionary biology is littered with terms like “cheaters” and “freeloaders” and these terms could be very misleading. Reference: PNAS http://dx.doi.org/10.1073/pnas.1006872107More on ant partnerships: