How reptiles got their scales. 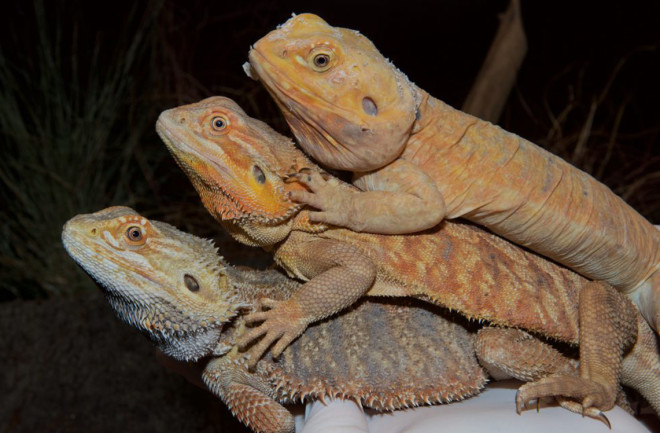 Bearded dragons like these (bottom is normal, top is “naked” and the middle is a hybrid) were key in finding a link that explains the evolution of scales, feathers and hair. (Credit: Michel C. Milinkovitch)

When University of Geneva biologist Michel Milinkovitch started studying naked bearded dragons, he just wanted to know why the lizards didn’t have scales — he never expected to solve a major evolutionary puzzle.

Biologists have long debated whether reptile scales, bird feathers and mammal hair evolved from the same body part on the animals’ distant shared ancestor. But it seemed unlikely, because the body coverings were thought to grow differently: Feathers and hair develop from specialized plates of thickened ectoderm — an embryonic cell layer — called anatomical placodes, structures not seen in reptiles. Scales were thought to develop from raised skin areas without placodes.

Each of these structures, called placodes and displayed in dark blue, will give rise to a hair, a scale or a feather. Here (from left to right), they’re shown on the embryonic skin of a mouse, a snake, a chicken and a Nile crocodile. It wasn’t until 2016 that scientists realized reptile scales developed from placodes. (Credit: Di-Poï & Milinkovitch 2016 Science Advances)

As Milinkovitch scrutinized differences between embryos of his naked dragons and normal lizards, he realized normal lizards do have placodes, but they exist for a few hours and appear in different places depending on the species and the developmental stage.

“You have to look really at the right time, at the right place, otherwise you just miss them,” Milinkovitch says. Knowing where and when to look, he found placodes in other reptiles, too.

He also discovered why his dragons were naked: A mutated gene involved in placode formation. Other vertebrates — including humans — share this gene. When mutations occur there, the vertebrates may end up with missing placodes, or sweat glands, teeth or nails that are deformed or just absent.

Milinkovitch and co-author Nicolas Di-Poï published these findings in June in Science Advances, finally closing the book on this long-standing mystery.