The Japanese pinecone fish searches for food with living headlights. This ­­hand-sized fish harbours colonies of light-producing bacteria in two organs on its lower jaw. The beams from these organs shine forward, and when night falls and the fish goes searching for food, its jaw-lamps light the way.

Elsewhere in the Pacific Ocean, the Hawaiian bobtail squid also uses luminous bacteria, but theirs act as a cloaking device. They produce a dim glow that matches the strength of moonlight from above, hiding the squid's silhouette from hungry fish below. It's a mutual relationship; the squid gets protection and it pays its residents with sugars and amino acids.

The glowing bacteria of these two animals may have different uses, but they are actually the same species - Vibrio fischeri, a free-swimming bacterium found in almost all of the world's oceans. V.fischeri isn't inherited; instead, it colonises the light organs of both fish and squid when they are young. Its challenge is to recognise the right partners among the myriad of species in the ocean, and not end up in the wrong body.

But its potential hosts, the bobtail squid and the pinecone fish, are incredibly different animals, separated by over 550 million years of evolution. How does one bacterium manage to form tight alliances with such disparate hosts?.

Incredibly enough, it does so with a single gene. Mark Mandel from the University of Wisconsin found that the strains of V.fischeri in the squid contain a gene called RscS that is missing or very differentin those found in fish. RscS was the genetic innovation that allowed a fishy bacterium to set up shop in the body of a squid. 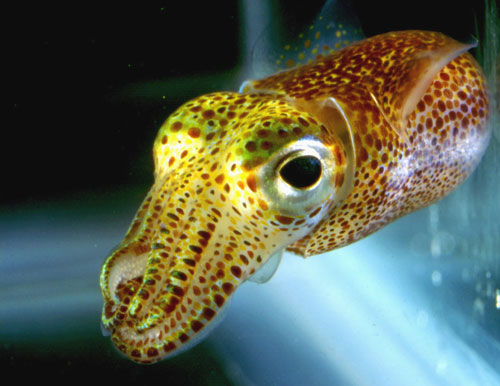 Mandel made the discovery by looking for differences between the genomes of two V.fischeri strains - MJ11 from the pinecone fish , and ES114 from the squid. MJ11 can't colonise squids, so Mandel reasoned that the gene (or genes) responsible for ES114's partnership would be unique to this strain and missing in MJ11's genome. RscC fitted the bill perfectly, and earlier studies had already shown that this gene plays a role in initial phases of the partnership.

In the ES114 strain, RscS switches on another gene called SypG, which in turn produces long polymers of sugar molecules called exopolysaccharides. These large molecules provide the support that V.fischeri needs to produce large communities called biofilms and gain a foothold in their new host. These sugar polymers are the concrete that builds bacterial cities

The fishy MJ11 strain can also produce the same material but it obviously lacks the RscS gene that kick starts the whole process. But when Mandel donated copies of RscS to MJ11, he found that this strain not only produced biofilms, but successfully set up shop in young squid. They even formed colonies as readily as the squid's natural partner ES114.

By analysing even more V.fischeri strains from fish and squid throughout the Pacific, Mandel found two versions of RscS. One of them, RscSA, is found in all bacteria isolated from squid, but only one strain taken from fish. The other, RscSB, is only 85% identical to RscSA and much larger in size - it is only found in fish-based bacteria, and then only in about half of them.

It's the RscSA gene in particular that turns V.fischeri into a squid tenant, and it's telling that the only fish strain that could colonise squid was the only one with this smaller version. But it lost that ability when Mandel interfered with the gene, proving that RscSA is both necessary and sufficient for squid settlement. 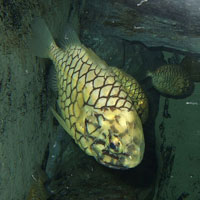 By constructing a family tree of V.fischeri strains,Mandel managed to reconstruct the evolution of this bacterium, as it jumped from host to host. He showed that strains carrying either version of RscS form a tight-knit and exclusive family. RcsS almost certainly turned up in the V.fischeri genome just once, and was passed down from bacterium to bacterium. In the genomes of modern bacteria, the gene is still always found in the same place.

RscS's origins are unclear. It's unlikely to be an altered copy of another V.fischeri gene or a mash-up of several genes, for it bears no resemblance to any other stretch of DNA in the bacterium's genome. Mandel thinks it was probably a loan from another species - just one of the many genes that bacteria transfer so willingly and so regularly from one to another.

Wherever it came from, the advent of RscC turned the bobtail squid into a potential host for V.fischeri. The RscSA version was the first to develop and strains carrying this could colonise both hosts. At some point, Mandel thinks that RscSA evolved into the larger RscSB within the bodies of fish. The gene adapted in some way to this specific host and in doing so, lost its compatibility for squid.

This story seems complicated but at its heart is a truly remarkable event. The addition of a single gene, RscS, changed the host range of a bacterium, not because the gene interacts with the host in any way, but because it unlocked abilities that V.fischeri already had.

RscS is a "regulatory gene", an executive that controls the actions of many minions - in this case, it took over command of existing biofilm-producing genes. The bacterium was already fully equipped with these genes and was almost certainly regulating them in a different way. All RscS did was to deploy them differently. How exactly this reprogramming allowed the bacteria to partner with squids is unclear, but that's a detail for a future study.

Mandel's study is one of the first to lay out the genetic forces that solidify a partnership between a bacterium and an animal. These alliances are common (think humans and our gut bacteria) but we know precious little about what makes them tick. Nor are we clear on the genetic factors that make disease-causing bacteria picky about their hosts. Why, for example, does the "Typhi" strain of Salmonella enterica affect only humans, while the Typhimurium strain (whose genes are 97% identical) infects mice and many other animals?

We probably shouldn't be surprised at that. If the story of the squid, the fish and V.fischeri tells us anything, it's that tiny genetic changes can open massive new doors for bacteria.