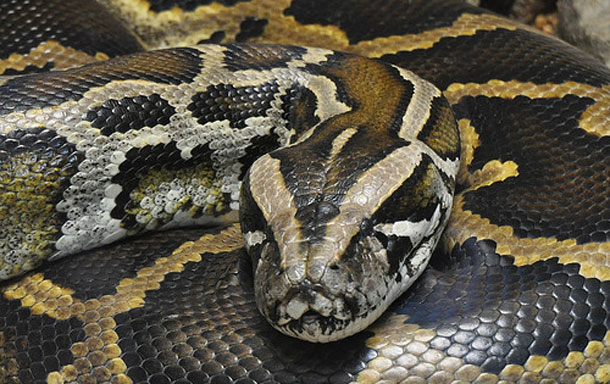 It turns out that if you unleash giant snakes into a place that didn’t previously have giant snakes, the other local animals don’t fare so well. That seems obvious, but you might be surprised at just how badly those other animals fare. Since 2000, Burmese pythons have been staging an increasingly successful invasion of Florida. No one knows exactly how they got there. They normally live in south-east Asia and were probably carried over by exotic wildlife traders. Once in America, they could have escaped from pet stores or shipping warehouses. Alternatively, overambitious pet owners could have released when they got too large for comfort. Either way, they seem to be thriving. With an average length of 12 feet (4 metres), the pythons are formidable predators. They suffocate their prey with powerful coils, and they target a wide variety of mammals and birds. The endangered Key Largo woodrat and wood stork are on their menu. So are American alligators (remember this oft-emailed photo?). Conservationists are trying to halt the spread of the giant snakes, out of concern that their booming numbers could spell trouble for local wildlife. Michael Dorcas from Davidson College thinks they are right to be concerned. In the first systematic assessment of the pythons’ impact, Dorcas has found that many of Florida’s mammals have plummeted in numbers in places where the snakes now live. Raccoons, for example, used to be one of the most frequently seen animals in Florida’s Everglades National Park. Between 1996 and 1997, you’d see one every 35 kilometres on the local roadsides. That’s no longer the case. In the last few years, Dorcas and his team have driven over 57,000 kilometres of Everglades tracks, counting animals as they went. They worked between sunset and sunrise on 313 separate nights. Their roadside census showed that since 2003, when the python populations really took off, raccoon sightings have fallen by 99.3 per cent. Opossum numbers have fallen by 98.9 per cent. There are 87.5 per cent fewer bobcats. They didn’t see a single rabbit. This could, of course, be coincidence, but the numbers fit in both time and space. The mammal populations have suffered the greatest losses at the southern end of the park where the pythons first staged their invasion. At the further corners, where the snakes have only been recently found, the mammals’ numbers haven’t fallen quite as far. And mammal sightings were even more common in two areas outside the park, where pythons have never been seen. It’s possible that some other factor has simultaneously triggered the decline of these mammals, but it’s hard to think what that might be. There’s no evidence that they’ve been hit by a new disease, and they all hail from diverse groups, which makes the possibility of a shared infection less likely. Hunting is unlikely too. It’s banned in the Everglades National Park. While some inevitably happens, it’s hard to imagine that it would occur at the scale necessary to bring about the falls that Dorcas saw, especially in the park’s remote southern area. This is probably just the tip of the iceberg. Raccoons and opossums are easy to spot; there may be dozens of other species, including local birds, which are also being affected in less detectable ways. But beyond Dorcas’ hard statistics, it’s difficult to predict what impact the pythons would have. They could eat some species to extinction. They could outcompete other predators for food. They could allow mid-tier animals to boom in numbers, by getting rid of predators. Regardless, Dorcas’ results should give added urgency to attempts to control the invasive pythons. We’re actually in a fortunate position of having identified a problem a mere decade or so after it began. Other parts of the world haven’t been so fortunate. Shortly after World War II, the brown tree snake was introduced to the Pacific island of Guam. It slowly went about exterminating the native species. It took more than 30 years to work out what the snake was up to, and by then it was too late for many species. Thanks to the snake, the Guam rail and Micronesian kingfisher only survive in zoos. The Guam flycatcher has disappeared. The rufous fantail is no more. Hopefully, the Everglades will avoid the same fate. Reference: Dorcas, Wilson, Reed, Snow, Rochford, Miller, Meshaka, Andreadis, Mazzotti, Romagosa & Hart. 2011. Severe mammal declines coincide with proliferation of invasive Burmese pythons in Everglades National Park. PNAS http://dx.doi.org/10.1073/pnas.1115226109Image by Bobosh_tMore on pythons and other giant snakes: