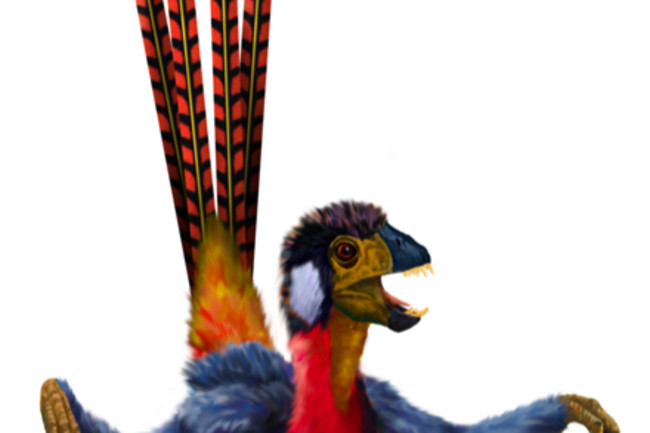 In recent years, dinosaurs have gotten awfully cute. They're no longer Victorian lumps of saggy muscle. A lot of them are not even frightening. They're fuzzy, feathery little critters. But, as I've written before, cuteness is not what drives paleontologists to hunt for these fossils and spend years poring over them in laboratories.

Today brings another case in point. Chinese paleontologists published a report in Nature about a new fossil they've named Epidexipteryx hui. The fossil comes from rocks that are somewhere between 152 and 168 million years old. Much of its skeleton was preserved on a slab, along with impressions on the surface of its body that the scientists conclude were feathers. At this point, the discovery of yet another feathered dinosaur is not big news. But Epidexipteryx looks to be important for several reasons.

One is its kinship to birds.  The researchers compared 363 traits on Epidexipteryx and 19 other dinosaurs and birds. Along with its feathers, Epidexipteryx has many traits that link it closely to birds, such as a humerus that's as long as its femur. In fact, the analysis reveals this dinosaur was one of the closest relatives to Archaeopteryx and all other birds capable of flight.

Obviously, Epidexipteryx was no flier itself. It didn't have the right feathers on its arms to give it enough lift. Nor did the many other feathered dinosaurs scientists have unearthed over the past 15 years. To understand what function feathers served before flight, paleontologists have looked to living birds. Flight feathers are just one of many different kinds found on them. Fuzzy feathers help insulate birds, and many paleontologists have proposed that insulation was one of the early adaptations of feathers on dinosaurs.

Epidexipteryx means "display wing," and the name is apt. Its remarkable tail feathers could not have helped it fly, nor could they have kept it warm. Instead, they bear a striking resemblance to the extravagant feathers of some living species of birds, like the widowbird. Male birds use long tail feathers to attract females, possibly by advertising their good genes. The tails evolve to great lengths, even though the males have to pay a cost--either in the energy to grow them, or in the drag they create during flight.

Epidexipteryx is compelling evidence that feathers had already evolved for display before birds used them to fly. It should not be surprising that other feathered dinosaur fossils discovered so far don't show signs of long tail feathers. Only a small number of living bird species have evolved to widowbird-like extremes, for reasons scientists don't yet understand. Sexual selection must have been at work in Jurassic dinosaurs, just as it is at work in their living cousins, the birds. And just as birds have evolved many different ways to show off--from rooster combs to red patches on red-winged blackbirds--it makes sense that dinosaurs evolved their own courtships too.