Here's a song for the male water strider, from the days when Rod Stewart could do no wrong: In my first two posts for Sex Week, I wrote about the delights of courtship: the alluring, informative fragrance of yeast and the seductive buzz of electric fish. These signals stir the opposite sex into action--to creep towards a fellow fungus, or to head-butt a prospective mate. But in many species, the actual consummation that all that courtship leads up to does not turn out to be a blissful union. Instead, some males will use all kinds of force and subterfuge to prolong their mating and raise the odds that their sperm fertilize their mate's eggs. And the females? In some species, they very often just want to get away. The reason for this unhappy union is pretty simple. In a lot of species, males compete with each other to fertilize the eggs of females. A single male makes so much sperm that he could, in theory, fertilize every female of his species. What limits his reproductive success is the access he has to females and their eggs. Females, on the other hand, are limited by how many eggs they can produce and rear. So it can pay for them to be choosy about which males they mate with. That doesn't necessarily mean they pick one male, however; females in many species mate with several males, and there's evidence that they can choose which male's sperm to fertilize their eggs. 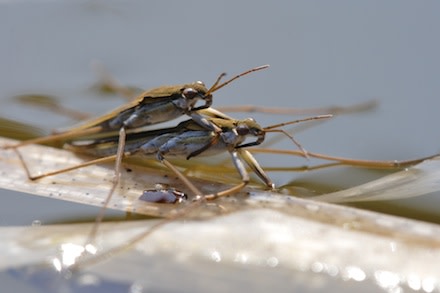 I've written on the Loom before about the various forms that this sexual conflict can take, from love darts to bickering bird parents to bizarre duck genitals, but one of the most extreme cases of this unromantic behavior can be seen in your local stream. Water striders skate over the surface of water, using their legs to sense waves from their prey. When it comes time for mating, a male water strider will feel for the waves of females. He will skate--or sometimes even leap--to land atop a mate. Very often, the female will struggle to get away, but he will wrap his legs around her midsection. The two insects fight; she may try various judo-like maneuvers to get him off, while he holds on as best he can. A female may raise her metabolic rate by 200% as she battles the male. If the male manages to insert his phallus into the female's reproductive tract, he inflates it to keep it in place. He will hold onto her as long as possible--in some cases, as long as twelve hours--to raise the odds that his sperm find her eggs, and reduce the time the female has to mate with other water striders. This kind of behavior has evolved because it can, under some circumstances, bring male water striders more offspring. Water striders, like many animals, have different personalities. Some male water striders are aggressive, and some are hyperaggressive. They are so eager that they'll jump on males as well as females.. A team of scientists at Binghamton University mixed together water striders with different personalities to see how they would fare in the mating game. They found that in a mixed group of males, the hyperaggressive water striders had greater success than their milder rivals. If hyperaggressive males can pass on their genes so well, why aren't all male water striders over the top? One reason may be that selection can have different effects on animals at different levels. At the level of individuals, hyperaggressiveness may give an edge. But water striders don't live in isolation. They live in groups, gathering in isolated riffles or side-ponds in streams. If you look at groups of water striders, hyperaggression turns out to be a disaster for males. Hyperaggressive males wear females out with their wrestling. The females try to hide off the water, so that they can't feed, and as a result they produce fewer eggs. The scientists even found that females will sometimes just abandon their group and seek out another place to live, where the males aren't so overbearing. The groups where milder males live are flooded with females, so that each male has more females to approach. As a result, groups of mellow males can have more offspring than groups that contain hyperaggressive water striders. The battle of the sexes rages on, but the opposite effects of individual selection and group selection keep it in check. [Image: macropoulos]