Selection without adjective and bound 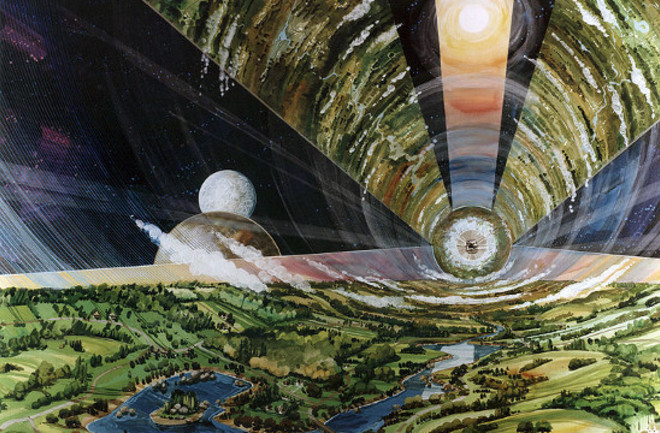 A "space colony" In my post below where I take a stand against the tired, but inevitable, assumption that a post demographic transition society necessarily entails a cessation of biology evolution, a reader brings up a trite but specious observation:

But you're missing the point really. We've slowed (not stopped because it can't be stopped) because we now control our environment. Evolution is moving from individual biological expression to cultural and technological evolution.

This isn't novel or exceptional in its wrongheadedness. The same idea comes up when I engage in discussion with the types of intellectuals in sociology or anthropology unencumbered by the constraints of "Western linear thinking." The presumption is that natural selection operates through exogenous environmental pressures, and as we attenuate those pressures we diminish the rate of evolutionary change. The stylized model being: Rate of evolution ∝ natural selection ∝ 1/(control of environment) As the magnitude of human control of the environment increases, the magnitude of natural selection decreases, and so does the rate of evolutionary change. This impression was already cursorily dispatched in my prior post. But as there hasn't been strong selection in the human past for reading and comprehending something before commenting on it, this issue might require a little teasing out, as the stylized model above is so ubiquitous as to be a background assumption of many. Looking back to the past agriculture was one of the major steps forward in regards to 'controlling' our environment. And yet some have argued that this shift resulted in accelerated change through adaptation, not less. Even if you are skeptical of this general model, there are two instances of extremely powerful selection due to human cultural innovation which arguably entail control of environment that illustrate how humans can inadvertently remake their own genome. First, the instance of lactase persistence, which allowed for greater human population densities in areas which were not amenable to conventional grain agriculture. Second, the various malaria defenses became so prominent only after human clearing of the landscape resulted in more congenial habitat for the mosquitoes which incubate the pathogen (the fact that one of the most common varieties results in a recessive disease is indicative of its recent vintage). Pathogens highlight the reality that the distinction between natural and other forms of selection are to a great extent human semantic artificialities. If you conceive of evolutionary change as variations in allele frequencies over time then it is not relevant what is driving those changes. Drift tends to result in different patterns within the genome than selection, but the genomic differences between artificial, natural, and sexual selection are more difficult to conceive of as qualitative distinctions.* Additionally, the exogenous environmental aspect of how we conceive of natural selection hides the reality that multicellular organisms are to a great extent a collaboration between the somatic cells generated by the germ line of the individual in question, and microbes of various kinds (there are 10 times more microbial cells in human bodies than somatic cells). These microbes are often beneficial, but they can also be inimical. The emergence of antiobiotics has not abolished the co-evolutionary dance, as resistance illustrates. One might object that reduction in human mortality is the relevant fact at issue here, but this reduction itself is probably imposing a selective pressure by allowing for the persistence and perhaps increase in frequencies of alleles which would otherwise correlate with higher risk of infection. Adaptation to diseases themselves often have costs, so it is not impossible to imagine that there is positive selection for different alleles in an antibiotic saturated environment. But this is the past. What about the future? The NASA artwork at the top of this post is of a hypothetical [strike]'generation ship'[/strike] 'space colony.' These are by definition human controlled environments. And yet as a thought experiment, would you presume that here the rate of evolutionary change is somehow diminished from our current state? Perhaps my intuitions are peculiar, but I suspect that the type of person who could flourish in the confines of a space colony is probably somewhat different than the typical earth-bound personality. Additionally, it is not unlikely that some major environmental parameters would be shifted for pragmatic reasons (e.g., lower simulated gravity to converse energy required to rotate the vessel?). This gets to the reality that human control is totally irrelevant, but what humans have wrought entail changes upon humans themselves. Not an original thought, but somehow this reality flees us when we think of the framework for biological evolution, which is one of those phenomena subject which serves as a feedback (as well as input!) to our cultural evolution. Finally, what about comparing evolutionary change to technological or cultural change? Surely the two latter dimensions are much more rapidly changing that biological evolution now? My own impulse is to concur, though I would have to admit that it is difficult comparing across these categories. But, one does have to consider whether cultural change is as rapid as we sometimes think it is. Arguably the cultural distance between 1963 and 1973 is greater than between 1973 and 2013. As far as technological change, there are reputable skeptics of what we've accomplished in the decades since the Second World War (I am not one of them for what it is worth). Ultimately the key takeaway perhaps is that it isn't quite as simple as first impressions might lead you to think. Exploring the various angles on the issue can actually be quite illuminating. And you might consider whether it is useful or not to think about evolution more than deeply than you might otherwise have done. * Sexual selection can have sex specific pressures, so it is not that difficult to imagine in that case, at least over the short term before modifiers arise.