Selection for cholera and Chinese in Bangladesh 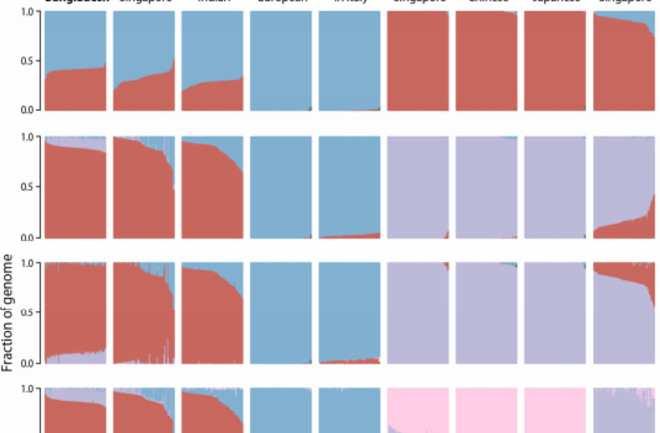 Credit: Sci Transl Med 3 July 2013: Vol. 5, Issue 192, p. 192ra86, Sci. Transl. Med. DOI: 10.1126/scitranslmed.3006338 Right before I was to sleep a reader sent me an email which pointed to a Nick Wade piece in The New York Times, Gene Sleuths Find How Some Naturally Resist Cholera. It's about new research in ScienceTranslational Medicine, Natural Selection in a Bangladeshi Population from the Cholera-Endemic Ganges River Delta. The authors use the "composite of multiple signals" (CMS) test to ascertain regions of the genome subject to natural selection (look for long haplotypes, high frequency derived alleles, and alleles with high cross population frequency differences). The results aren't too surprising, I was born in Bangladesh, and I can attest to the fact that it's a germaphobe's nightmare. Rather, it is a secondary and very minor aspect of the paper which frankly draws my ire. First let's quote Wade's treatment:

As a necessary preliminary to testing for natural selection, the researchers looked at the racial composition of the Bengali population and found that they are an Indian population with a 9 percent admixture of East Asian genes, probably Chinese. The admixture occurred almost exactly 52 generations ago, according to statistical calculation, or around A.D. 500, assuming 29 years per generation. The Gupta empire in India was in decline at this time, but it is unclear whether the intermarriage with East Asians took place through trade or conquest. “We can now go back to the historians and see what happened then,” Dr. Karlsson said.

But sometimes science gets garbled in transmission. What do they say in the paper? Again, the relevant section:

We estimate that the admixture between Indian and East Asian populations occurred 52 ± 2 generations ago (generation = 29 years)...or around 500 AD, based on the exponential decline of linkage disequilibrium (LD) with distance analyzed using ROLLOFF...This remarkably close-fitted age estimate roughly corresponds to the collapse of the Indian Gupta Empire, the rise of the Chinese Tang dynasty, and the brief unification of Bengal under a single ruler (590 AD to 625 AD). Although alternative histories, such as continuous admixture or multiple admixture events, are possible, the single-event model shows excellent fit to our data, and we found no statistical support for very ancient flow...Using the maximum likelihood–based ancestry estimation software ADMIXTURE (32), we found 9.3 ± 2.6% East Asian ancestry in the BEB....

If you read the rest of the paper you can see where Wade would get the idea that the admixture was "probably Chinese," but I don't think it jumps out from the text or the supplements. Perhaps he got this from the first author who is quoted; I have no idea. The population history component of this work is not essential to the understanding of the selection operating via disease, but the problem when this sort of confusion is allowed to stand is that it will become solidified conventional wisdom. I've seen this happen before, as throwaway lines have a way of persisting and spreading. Additionally, it also makes geneticists seem superficial when they step outside of their narrow domains of presumed knowledge. In fact the reality of who these East Asians are in the Bengali ancestral gene pool is clear in the supplements. At K = 5 you see that a Malay-like ancestral component emerges, and all of the East Asian ancestry of the Bengalis is assigned to this. You also have the Han Chinese and Chinese in Singapore data sets split between a Japanese-like and Malay-like component. The Chinese in Singapore is more Malay-like. This is entirely expected, as the Singapore Chinese population is disproportionately from the southwest region of Fujian, with a minority of Hakka (who are reputedly northern transplants to South China), as well as Straits Babba Chinese, who have maternal Malay ancestry. The Han Chinese data set is from the HapMap, with a Beijing sample which is northern biased.

In sum, the East Asian ancestry of the modern Bengalis is almost certainly derived from a group with the closest affinities to those in Southeast Asia, not, the Chinese

. I have long suspected this because I have genotypes for two unrelated Bengalis, my parents. I've talked about this before. Some preliminary investigation on my part looking at the East Asian segment length did suggest an admixture event ~1,000 years ago, so I can believe the ROLLOFF results. But comparing them to various populations, it's clear that the East Asian ancestry is Southeast Asian for both of them. Here's a MDS I generated 15 minutes ago using 133,000 LD pruned SNPs:

The Chamar are a low caste group from Uttar Pradesh (to the north and west of Bengal). You notice that my parents ("RazibFam") are both shifted toward the Southeast Asian groups. Totally unsurprising. No matter how you analyze the results this jumps out (the second dimension pulled out a few inbred individuals from another Southeast Asian group). So assuming one admixture event (or a primary one), what's a good story? Eastern Bengal has always been on the margins of and beyond Aryavarta, the cultural core of the North Indian plain. Magadha, the heart of the Gupta Empire in Bihar, was long a marchland. Like the region around Xian in northwest China Magadha was often the locus of the classical pre-Islamic Indian macro-polities, despite (or perhaps because of?) its liminal relationship to the broader Indo-Aryan culture of Northern India, which was fixed upon the Upper Gangetic plain. As Magadha collapsed, and Bengal rose under dynasties such as the Pala later in the first millennium the frontier of Indo-Aryan society rapidly expanded outward and eastward. But I doubt eastern Bengal was empty. It is quite possible there were slash & burn agriculturalists who had arrived at some previous time from Southeast Asia. And it is these who I believe were absorbed into Bengali society in toto.