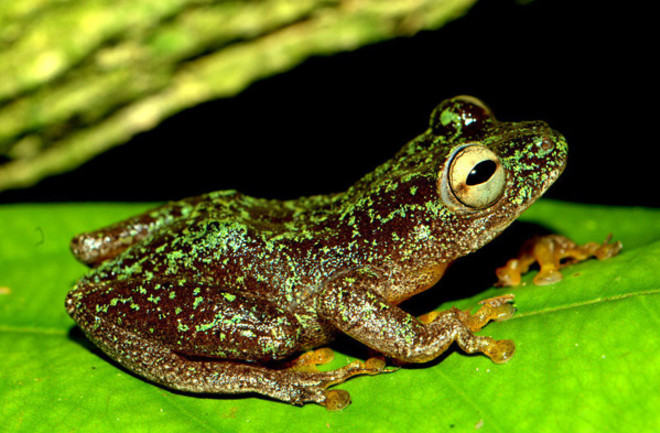 In August, Conservation International launched its globe-spanning search for amphibians that haven't been seen in decades, but still could exist. This month, they've tracked down their first three slippery specimens. Scientists turned up two long-lost African frogs and a salamander from Mexico.

"It's pretty extraordinary to think about just how long it has been since these animals were last seen," observed project co-ordinator Robin Moore of Conservation International (CI). "The last time that the Mexican salamander was seen, Glenn Miller was one of the world's biggest stars. The Omaniundu reed frog disappeared the year that Sony sold its first ever Walkman." [BBC News]

The three rediscovered animals are:

. Last seen in 1967, it lives in the Ivory Coast. A local scientist spotted it.

The find was made "in a swampy field in Danipleu, an Ivorian village near the Liberia border." [MSNBC]

Omaniundu Reed Frog (top). The most recently seen of the three, Omaniundu was last noted in 1979. It lives in the Democratic Republic of the Congo. According to Conservation International's account of the rediscovery:

Jos Kielgast, a student at the University of Copenhagen, re-discovered the species 300 km west of the locality where it was first found in an extremely remote area of the Democratic Republic of the Congo. He discovered it while night searching areas of inundated primary forest along a tributary of the Congo River. He heard its call, and searched for the frog for over an hour. They are only active late in the night and their call is short and infrequent. In the daytime they rest in an extremely cryptic colourphase, making them nearly impossible to find.

The salamander is native to Mexico's Hidalgo region.

As the human footprint expands, many amphibians are being pushed back into marginal areas, such as the Mexican cave system where the cave splayfoot salamander (Chiropterotriton mosaueri) turned up. There had been no sightings of this salamander since its initial discovery in 1941. [BBC News]

None of the three come from Conservation International's "10 most wanted

" species list. Nonetheless, it is awfully nice to see them again, especially considering the troubled state

80beats: Frog Species Are Hopping Into Extinction Before They’re Even Discovered

80beats: How Many Frogs Can Dance on the Tip of a Pencil

80beats: How the Frog-Killing Fungus Does Its Dirty Work