Scientists Zero in on a Frog Killer

It's a fungus called Batrachochytrium dendrobatidis, and they finally found where it came from. 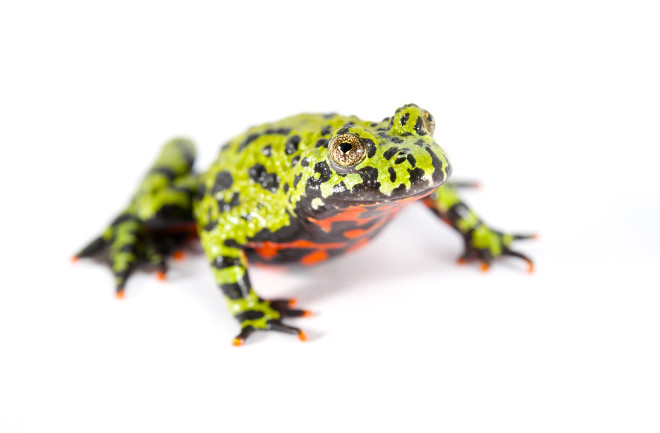 Globally, frogs are being imperiled by the fungus known as Bd. (Credit: Bert Willaert/Nature PL.com)

A May study in Science has revealed the long-sought origin of a catastrophic fungus that’s making frogs, well, croak.

Populations of more than 200 amphibian species, mostly frogs, began tumbling late last century. In 1999, researchers linked the deaths to specific strains of the fungus Batrachochytrium dendrobatidis, or Bd, which attacks the animals’ skin. Frogs use their skin for respiration, and the damage caused by certain strains of Bd can disrupt this function and lead to death. It’s estimated that Bd has already imperiled a third of the entire global amphibian population.

For decades, scientists have hunted for Bd’s geographic origin. The Science study finally revealed both Bd’s birthplace — the Korean Peninsula — and a timeline for the emergence of its deadly strains: 50 to 120 years ago.

The new research was the result of a decade-long effort to sequence scores of Bd genomes from six continents and compare them with previously published samples. When the analysis was complete, researchers identified four major Bd lineages, one of which was found only on the Korean Peninsula.

The Korean lineage was more genetically diverse than the other three, suggesting the other lineages originated from it, says Simon O’Hanlon, an infectious disease epidemiologist at Imperial College London and co-author of the study.

Although Bd appears to have existed for thousands of years on the Korean Peninsula, there’s no evidence that it caused any massive die-offs before the 20th century, when the lethal strains appear to have evolved. Their emergence coincided with an increase in amphibian exports — for food, traditional medicine and even pets — from the region. Researchers aren’t sure if Korean frogs have a natural immunity to the deadly strains, or if these particularly nasty forms of Bd evolved after the fungus spread beyond its ancestral home.